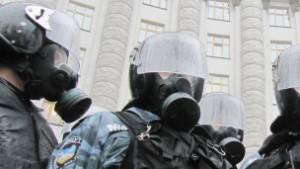 Seven students from Lviv who were returning from the Kyiv EuroMaidan rally in support of European integration allege that they were assaulted by Berkut riot police officers.  They were only released after an MP intervened.

One of the young people told the BBC Ukrainian Service that the hospital is still refusing to examine one of his companions.

The students’ lawyer, Yury Martynenko says that the incident took place on Monday afternoon when the 7 young people, aged between 20 and 25, were returning in their own minivan after being in Kyiv for two days taking part in the protest action against the government’s about-face on the EU-Ukraine Association Agreement.

They assert that three cars with Berkut officers came up to them near one of the cafes on Victory Avenue.  One of the young men, Andriy Slyuz, the son of Batkivshchyna MP Tetyana Slyuz, says that on the way to the police station they were beaten and told “You’re Bandyory [presumably supporters of Stepan Bandera – translator], for your “Glory to Ukraine” we’re going to take you to the forest and give it to you”  [the word used was vulgar and strong].  According to Slyuz, they were brought to the Pechersky Police Station at around 13.30 where they were again beaten.  He names Major Stolyar as having been witness to the violence inflicted by his subordinates.

He asserts that one of his friends was so badly beaten that the police couldn’t carry out any questioning.  Slyuz called an ambulance which took the young man to the State clinic on Laboratorny Alley.  The head of police, however, sent a group of officers to the clinic, Slyuz says, and the clinic refused to examine the young man and take a chest x-ray.

Andriy Slyuz says that he and his friends heard an important message from the Berkut officers: that they weren’t the first, and wouldn’t be the last.  He calls on lawyers and journalists to check whether other people illegally detained are not being held in Kyiv police stations.