Dangerous anonymitySo what are Crimean anti-terrorist officers doing in central Kyiv?High-Price Pro-Government ProvocationOpen Statement to the International Democratic CommunityBorys Gudziak: Spread the story of their courage and fortitude!Maidan: "I came because I couldn’t not come"Hundreds Injured in Kiev as Riot Police Crack DownInternational Renaissance Foundation breaks off collaboration with Ukrainian authoritiesUHHRU calls for President’s Impeachment and Dismissal of GovernmentPolice action incompatible with democracyBerkut violently breaks up EuroMaidanUS warns of consequences if EuroMaidan dispersedThugs attack Channel 5 film crew near pro-government rallyHromadskie.tv journalists beaten up in centre of KyivNo will to investigate harassment of journalistsNew political season brings journalists increased threats and intimidationCases of censorship and obstruction tripleTitushko and fellow assailants receive suspended sentencesAssaulted journalists angered by whitewashing of passive police officersOutrage and police excuses over Berkut violence against journalist
• Topics / Freedom of peaceful assembly

Party of the Regions inebriated electorate 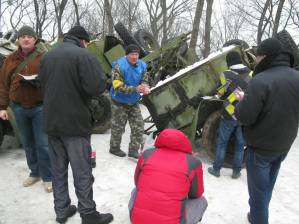 Oleh Martynenko*, together with other members of OZON, a civic initiative which monitors freedom of peaceful assembly observed this weekend's pro-presidential rally on European Square in Kyiv.  He disputes the figure of 50 thousand given by the ruling Party of the Regions and estimates no more than 8 thousand participants, with an abundance of party flags used to compensate for the lack of people attached to them.

What particularly disturbed him was not the hopelessness in the faces of those attending. He says that this is to be found in any of the depressed regions that the people were brought to Kyiv from.  What was especially worrying was the drunkenness. The participants could be divided into three groups: those already drunk; those on their way to being inebriated; and others just beginning to pour out and cut up their modest supplies.  He drily points out that the police looked away “demonstrating that you shouldn’t become fixated on trivial human failings” when the president has such important concerns for the country.

This approach enabled the law enforcement officers to ignore around 80 places where alcohol was being actively poured out, and more than 30 Party of the Regions supporters who needed to be actively propped up by those around them.   Despite all of this, not one administrative offence was registered through the entire event.

On Sunday’s continuation in Mariyinsky Park the police and interior forces seemed entirely oblivious to what Martynenko says was an incredible number of clearly obliterated “members of the Party of the Regions electorate”.

OZON monitors were considerably less tolerant, he notes, and in just one and a half hours of observing outside the Verkhovna Rada recorded at least 5 cases where people were openly being poured alcohol.  This is an administrative offence, but only OZON seemed bothered.  The latter required effort to force the police to notice that participants were drinking alcohol next to police vehicles!

One Kyiv police lieutenant told Martynenko that he couldn’t pay attention to these offences since virtually everybody was drinking – he wouldn’t have enough protocol forms.

The following said it all: “No, I won’t do anything. It’s useless. As it is we’re standing here like clowns. Now if this was in my district, then you can rest assured, I’d fine people and issue a warning. But here – no, let them drink. As long as they don’t make trouble”.

Martynenko writes that just for comparison they went off to see what was happening at EuroMaidan.  There at the entrance they found a placard reading “Welcome  - but sober”.  He says that after all that he’d just seen, he was sceptical and began walking up and down.  There were stoves here as well, with food and hot tea.  There were around 27 thousand people present, but all seemed able to use the bio-toilets which actually worked.  Most importantly, in this huge crowd they saw only two attempts to drink alcohol, and protesters themselves put a stop to it after the OZON people commented.

Martynenko concludes: “what we saw begs one provocative question: “7 thousand Party of the Regions voters surrounded by 1.5 thousand police officers – drunkenness and mounds of rubbish. 27 thousand EuroMaidan people and 10-15 traffic police officers – self-government and effort to maintain order. So which way forward?”

Oleh Martynenko has a doctorate in law and many years of experience working within the Interior Ministry.  He headed the department for monitoring police observance of human rights until this was disbanded by the new government in 2010.  He then helped to found and headed the Association of Ukrainian Human Rights Observers of Law Enforcement [UMDPL], (an NGO) which he still works closely with.