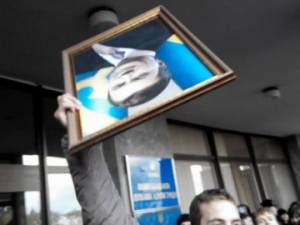 Criminal charges have been laid against Maya Moskvych and five other people, including Volyn deputies, over a protest action during which three portraits of the president were taken out of the Volyn Regional Council building and carried, upside down, to the centre of the city.

On Dec 16, a court in Lutsk ordered that Maya Moskvych, head of the NGO National Alliance be placed under house arrest and wear an electronic bracelet.  The prosecution had asked for her to be remanded in custody, claiming that she would otherwise be able to communicate with people through social networks.

Moskvych is charged together with five other public figures, well-known in Volyn, seemingly with "denigration" of portraits of Viktor Yanukovych/ The charges are linked with a protest on Dec 2 over the violent dispersing by Berkut riot police of the peaceful EuroMaidan protest in Kyi on Nov 30 and the authorities’ silence over this.  The activists took three portraits of the president out of the Council buildings carrying them upside down.

The prosecutor, Vadym Prymachuk asserted that “Moskvych used a peaceful gathering to serve her own personal political aims” and that the activists had unlawfully seized the council’s property worth 540 UAH [around 50 EUR].   Moskvych is supposed to have stated from a stage in the centre of Lutsk that the first portrait should be burned, the second hung on a tree, and the third handed to the crowd to lynch. She is also alleged to have damaged one of the portraits by drawing an opening around the neck and pulling a rope through it.

The investigator, Yury Markevych insisted that the charges should be changed to Article 296 § 2 of the Criminal Code (incitement and calls to destroy state property).  He was also against the media being present claiming that the journalists were all Moskvych’s supporters.  The hearing lasted from 9 a.m. to nearly midnight. During that time, protesters stood outside the court singing patriotic songs and chanting “Freedom for Maya!”

One other person – City Council deputy Serhiy Grigorenko had already been placed under house arrest over the incident.  The hearing over a preventive measure was held against another deputy – Bohdan Shyba – on Dec. 17.  He was left at liberty under a personal undertaking, which includes restrictions on moving outside the area.

From reports at the Volyn Post and Radio Svoboda