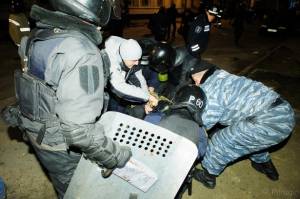 On Dec 19 the Verkhovna Rada adopted a draft bill which apparently provides an amnesty for those who took part in the EuroMaidan protests while not protecting those guilty of beating up peaceful protesters.  How much it will achieve this is, unfortunately, not so clear.

The title of the draft bill seems alarmingly broad in scope: “On removing adverse effects and preventing persecution and punishment of people as the result of the events during peaceful gatherings”.  The opposition who tabled the bill say that they managed to agree this bill with the Party of the Regions and remove the bill proposed by ruling party MP Vadym Kolesnichenko.  The latter had offered an amnesty for all involved, this clearly including Berkut riot police guilty of unwarranted brutality against peaceful protesters.  The bill passed says that liability is waived for “people who were participants in protests and large-scale events regarding their actions and decisions from Nov 21 to the day this Law takes effect”.  According to a former justice minister, Roman Zvarych, the draft law is illiterate and non-specific. He says that the term “participant” is not clearly defined in Ukrainian legislation meaning that it could be applied selectively. This is increasingly the fate of most laws in the country, and if there was a way of ensuring total clarity, Zvarych did not mention it.

The term may not be clear, but the authorities would surely be stretching it to call Berkut riot police “participants”.  The only mention of peaceful assembly is in the title, making quibbles over what constitutes peaceful protest difficult. On the other hand, certain individuals who did undoubtedly play a part in the actions and whose testimony could prove most inconvenient to those who ordered the police action will also be covered by the amnesty.  With regard to the events on Bankova St on Dec 1, this includes first and foremost Dmytro Korchynsky. He and his organization Bratstvo are notorious for acts of provocation aimed at causing confrontation and a police crackdown.  Despite having been seen near the bulldozer seized by masked louts and then used in a confrontation with Interior Ministry forces outside the president’s administration, the police announced that Korchynsky was not a suspect and only placed him on the international wanted list after outcry, and of course after the man had obliged by going into hiding.  Korchynsky could provide a vital key to understanding the confrontation on Bankova St which is widely believed to have been orchestrated.

While the police were assiduously ignoring Korchynsky, the prosecutor was demanding 2 month detention orders first for 9 men arrested on Bankova St, then for some others including well-known Road Control journalist, Andriy Dzyndzya and photographer Oleh Panas.  All such applications were allowed by the judges at the Shevchenkivsky District Court despite the fact that seven men were still hospitalized after their treatment by Berkut riot police and the only testimony against them was from riot police known to have used unwarranted force against peaceful protesters

Some were released last week, the others should hopefully go free if the bill is signed into law.  The criminal proceedings in these and a number of other cases should without any doubt be terminated, however that will also make it easier for Berkut officers to escape liability. Having suffered concussion and serious injuries, then found themselves charged with an offence carrying an 8-year sentence, it is unlikely that many of the men will feel up to lodging legitimate complaints about their treatment by Berkut officers.

It seems likely that the amnesty will not apply to Viktor Smaliy, Road Control lawyer remanded in custody for 2 months on highly questionable charges.  He is accused of attempting to murder the judge who remanded his client Dzyndzya in custody. On Friday, Dec 20 the court rejected his appeal against the 2-month detention order.  Smaly is not alone in believing that the case against him has been brought to intimidate other lawyers.

The huge number of titushki or hired louts who were brought into Kyiv and who actively tried to provoke trouble and beat up journalists will also be amnestied as participants in the events.  Since the bill applies to all actions which take place before it comes into force, it may not be unduly cynical to expect new attacks and provocation in the coming days.

There are also more and more reports of people facing dismissal, receiving threatening summonses, etc, over their participation in EuroMaidan.  The law does nothing to protect them.

The Association of Ukrainian Human Rights Monitors on Law Enforcement has just issued a damning analysis of the deployment and behaviour of Berkut riot police during the dispersing of peaceful protesters on Maidan Nezalezhnosti on Nov 30 and during the Dec 1 confrontation on Bankova St.   Those who issued the order to violently disperse peaceful protesters, and the officers who used excessive force should be identified and held to answer.  At present there seems little will to do more than dismiss scapegoats, with Andriy Klyuev, secretary of the National Defence and Security Council, Vitaly Zakharchenko, Interior Minister and others remaining untouched.  While absurd criminal charges laid against the victims of police brutality certainly need to be dropped, there are all too many questions that must not be muffled.