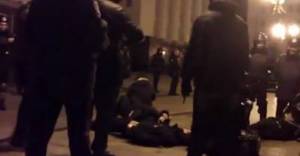 Serhiy Radchenko, one of the peaceful protesters who disappeared after the brutal attack by Berkut riot police on Nov 30 has been found alive, though in a very bad state.  The news was reported by singer Ruslana Lyzhychko.  Serhiy Radchenko is around 25, and lives in Kyiv.  He was beaten by the riot police in the early hours of Nov 30.  On Dec 1 he was on a train to Stryi to visit the grave of his parents when he lost consciousness. He was taken to hospital where they found that he had a fractured skull.

He came out of a coma on Dec 21 and is able to speak but maximum care is needed since he is very weak.  Ruslana has promised to contact the doctors and find out what help is needed.

Lyubomir Derevyanko, b. 1985, from the village of Solotvyno in the Ivano-Frankivsk oblast