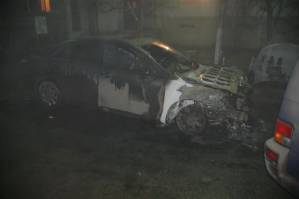 The arson attack which destroyed Ivan Varchenko’s car came in the 15 minutes that the car was unattended, and follows an incident which the police are ignoring where a deliberately unscrewed wheel could have caused a dangerous accident

Varchenko says that he had arrived with his children from the shop and was planning to re-park the car in a safe place where he has been keeping it all this week.  He was given a chance.  In the 15 minutes that the car stood unguarded, it was set alight.  He believes that the culprits had been following his movements and therefore knew that they had to act quickly.

Virtually the whole front of the Toyota has been destroyed, and the car cannot be salvaged.

Although the fire brigade and police arrived quickly, Varchenko is not optimistic that the police will find the culprits.  He points out that a week ago there was effectively an attempt on his life when one of the front wheels on his car was slightly unscrewed.  The aim, he is sure, was that the wheel would fall on while he was driving fast, and cause an accident.  He says that he officially approached the police and asked them to take measures to ensure his safety. He has still heard nothing and says that they couldn’t even decide which article of the criminal code to initiate an investigation under.