I am a Drop in the Ocean … that will change UkraineHelp Ukrainians Stand Up for Western ValuesHigh-Price Pro-Government ProvocationOpen Statement to the International Democratic CommunityBorys Gudziak: Spread the story of their courage and fortitude!Maidan: "I came because I couldn’t not come"Hundreds Injured in Kiev as Riot Police Crack DownInternational Renaissance Foundation breaks off collaboration with Ukrainian authoritiesUHHRU calls for President’s Impeachment and Dismissal of GovernmentPolice action incompatible with democracyBerkut violently breaks up EuroMaidanUS warns of consequences if EuroMaidan dispersedThugs attack Channel 5 film crew near pro-government rallyHromadskie.tv journalists beaten up in centre of KyivNo will to investigate harassment of journalistsNew political season brings journalists increased threats and intimidationCases of censorship and obstruction tripleTitushko and fellow assailants receive suspended sentencesAssaulted journalists angered by whitewashing of passive police officersOutrage and police excuses over Berkut violence against journalist
• Topics / Freedom of peaceful assembly

On the Road in „Solidarity against Terror”: 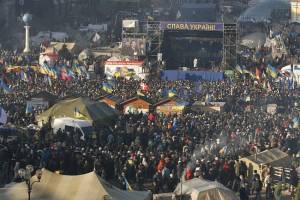 The sixth EuroMaidan Sunday rally in central Kyiv on Dec 29 was the first since investigative journalist and civic activist Tetyana Chornovol was brutally beaten.  She is still in hospital, but the numbers of people both in Kyiv and on the “autoMaidan” or car rally shown that protesters had certainly not been frightened by the attacks on Chornovol and others.

The rally began in Kyiv under the banner “Solidarity against Terror”.  It was then followed, Liga.news explains, by personal warning actions with processions of cars and bikes making their way to the president’s highly controversial residence at Mezhyhirya, as well as the homes of prime minister Mykola Azarov; parliamentary speaker, Volodymyr Rybak; and also Viktor Medvedchuk whom the protesters called Putin’s puppeteer in Ukraine. “We’ve come to say that if they don’t meet our demands, then our Sunday excursion will turn into a permanent round and we will invite all Ukraine here”.

The protesters are demanding the dismissal of the government, release of all those detained and end to all repressive measures;  proper investigation and prosecution of those responsible for the savage beating of peaceful demonstrators on Nov 30, and a return to preparations for the EU-Ukraine Association Agreement.

Mezhyhirya was once a state residence but through various corrupt dealings, many of which became known through Chornovol’s investigations, has been privatized and is believed to actually belong to Viktor Yanukovych.  As reported here, previous attempts to hold perfectly peaceful gatherings outside the gates of the vast residence have led to court bans; large contingents of Berkut riot police being deployed and even terms of imprisonment (See Protecting the President’s Patch)

The police initially blocked the road to Mezhyhirya, however backed down and eventually cars got to around 300 metres away from the gates, from where they called on Yanukovych to come out and talk to the people. 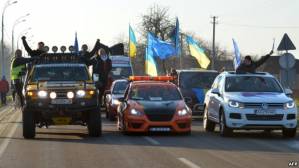