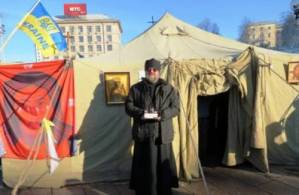 The latest target of illegal visitations by traffic police officers is the Lviv Greek Catholic priest, Father Mykhailo Dymyd, who has been ministering to members of the Lviv EuroMaidan.

Father Mykhailo recounts that traffic police officers arrived at his home. “They claimed that they had information that somewhere in the Kyiv oblast, I had failed to stop on the demand of one of their colleagues.  I spoke with them in front of the house, videoed this and didn’t sign anything. The neighbours all gathered.  The police tried to hand me a summons but I didn’t take it and said that I wouldn’t go to them. And that I would be getting advice from the Maidan lawyers. I’m going to download the video and in the evening put it on facebook”.

As reported, traffic police have been turning up at the homes of people who took part in the EuroMaidan car rallies to the president’s controversial estate at Mezhyhirya and to the estates of people in high positions under the present regime.  The standard pretext is that the person being visited did not stop at the demand of a traffic officer on Dec 29.  After considerable publicity over such overt attempts to intimidate protesters, the police promised to abandon all visitations, invitations to a “chat”, and other forms of pressure.  As with other promises made during the last 5-6 weeks, this one proved to be empty from the very day it was made and the pressure is continuing.