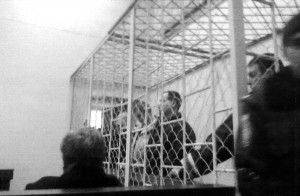 A Kyiv court has convicted three men of plotting to blow up a Lenin monument which had already been removed. This incomprehensible “terrorist plot” has resulted in 6 year sentences for the three, all of whom have small children.  Cries of protest were heard as soon as the judge, Yury Burbela, announced his verdict, and there have been scuffles outside the Svyatoshynsk Court where several hundred people were holding a picket.   Reports suggest that Berkut riot police have used a gratuitous level of force against all protesters and journalists, some of whom have been injured and taken to hospital..

Today’s verdict was not unexpected given the cynicism with which this trial has been run, but profoundly disturbing given the absurdity of the charges and the lack of any evidence.

Two deputies of the Vasylkiv Town Council  -  Ihor Mosiychuk and Serhiy Bevz, and fellow member of the far right organization “Patriot of Ukraine”, Volodymyr Shpara  have been found guilty of planning to blow up the [already dismantled] monument to Vladimir Lenin in Boryspil on Independence Day in 2011, planning a terrorist act and illegal use of weapons and explosives. They are also supposed to have called for the overthrow of the constitutional order.

Even if all the supposed evidence which the men say was planned is deemed to have been authentic, there is simply no proof of anything except the men’s “Patriot of Ukraine” affiliations.

A phone call intercepted by the SBU [security service] makes it quite clear that the men knew that the Lenin monument had been dismantled, and therefore that the SBU knew that they knew.  Why they should have plotted to blow up a non-existent monument is anybody’s guess.  Why the SBU should have persisted in accusing the men of such idiotic behaviour has, unfortunately, become clear today.  Judge Burbela paid no heed to the surreal nature of the impugned plot, evidence corroborating the men’s claims that the material evidence had been planted, and multiple procedural infringements.

In searches of the men’s workplace, homes and a hostel where Bevz was registered, but did not live in August 2011, the SBU allegedly found:

2 leaflets, one of which the men acknowledge was theirs and one which they say was planted.  The latter expresses determination to eradicate all monuments to Ukraine’s totalitarian past.  The view that this includes all monuments to Lenin is shared by very many Ukrainians who dislike the men’s organization.  The disputed leaflet ends with a threat to turn their “righteous anger” against the president, Viktor Yanukovych if he does not comply with their demands to totally destroy all monuments to the totalitarian past, and a call to “patriots” to unite in acts of disobedience and to learn about military and explosives issues.  This was not found even by the specialists called in by the SBU to contain any call to commit an act of terrorism or overthrow the constitutional order.

A “bomb” which the men are adamant was planted, and which did not hold any fingerprints or DNA traces of the accused.  The investigators refused to ascertain who the fingerprints found on the alleged bomb did belong to. This purportedly dangerous explosive device was carried out of the flat by an SBU officer without any precautionary measures, and without explosives experts having been called in.  It was later destroyed during an examination making it impossible to check whether it had in fact ever contained explosives.

All three men have been in custody for 2 years already and today’s sentence, if not overturned at appeal level, could mean that they spend another four years in prison. The cynicism demonstrated thus far makes it hard to be optimistic about the chances for a just ruling in any domestic court.  The violent confrontation on Friday evening may well be part of a plan to radicalize opposition, with any crackdown then seemingly forced upon the authorities. This case has, from the outside, appeared to have been in fulfilment of a political order.  This is only confirmed by today’s court ruling convicting men of plotting to commit an act which was known by all parties to be impossible.