Donbas farmers complain of pressure over their support of EuroMaidan 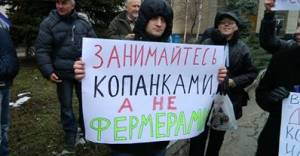 The words say: Pay attention to kopanki [illegal coal mine], not farmers!  There is a lot of evidence to suggest that the authorities at very least turn a blind eye to these illegal mines which are extremely dangerous

Farmers from Donetsk who have sent money and food for the Kyiv EuroMaidan have faced questioning from the tax police and accuse the authorities of pressure.

A number of farmers held a picket outside the regional tax inspectorate last Wednesday in support of local farmers who came under the scrutiny of the tax inspectors after their donation.

Several members of the Mariynsky District Association of Farmers were summoned for questioning at the Donetsk Regional Department of the Ministry of Incomes.  The tax inspectors allege that the farmers are involved in financial operations with a coal firm.  The farmers deny any cooperation with the firm and say that they use equipment powered by gas, not coal.   They believe the tax inspectorate’s interest to be because they sent 16 thousand UAH to support the Kyiv Maidan at the beginning of December.

Vitaliy Pozhydaev from the farmers’ association told Radio Svoboda that the authorities are trying to intimidate them but that this won’t work. They pay the correct taxes and say that there is nothing that the tax police can find against them.  Pozhydaev explains that “we’ve therefore come here to show the authorities that we’re not afraid, and will not give in”.

Activists from the Donetsk EuroMaidan also consider the tax inspectorate’s attention as being a form of repression and joined in the picket.  Various reports say that 100 to 200 people from EuroMaidan, civic organizations and political parties took part.

The tax inspectorate denies any link between the questioning and the farmers’ support for EuroMaidan.

A LiveJournal report on the protest reports that in rural areas of the Donetsk oblast there is a high level of disgruntlement with the current regime. The author mentions dodgy setups over land plots and people being conned out of their land shares. 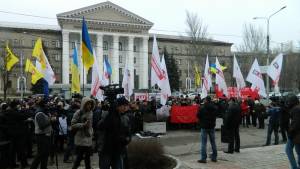