Writers, journalists and activists hand themselves in 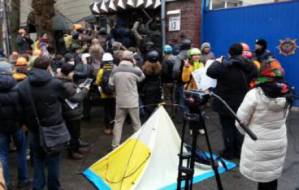 In one of a number of original protests, a group of Ukrainian writers, journalists and civic activists arrived on Saturday, Jan 18 at the Kyiv SIZO [remand prison] to confess for the masks (saucepans and bowls…) on their heads, their car procession and other “offences” as per the new anti-protest law.

They were in this way reacting to the anti-protest laws pushed through by the ruling majority with multiple infringements on Thursday, and then speedily signed into force on Friday evening by the president, Viktor Yanukovych.

As well as all the other procedural infringements seen in the “adoption” of this repressive law, it also appears that the “show of hands” was even more selectively counted than had previously been released.  Opposition MP Lesya Orobets has published the photo below which seems to indicate that there was roughly half the number of MPs needed for a majority vote.

The most obnoxious law (No. 3879) includes penalties of up to 15 days imprisonment ("administrative arrest") for putting up tents or wearing masks or helmets during a demonstration.  Considerably longer periods of imprisonment could be imposed for blocking official buildings; seizing buildings or blocking roads and transport.

There are draconian measures, including steep fines, removal of driving licence for up to 2 years and possible confiscation of the vehicle, for taking part in a car procession with more than 5 vehicles.  Only without the consent of the traffic police, of course, but despite the Constitution saying nothing about any requirement for “consent”, this will clearly not be given  (more details here)

“We Ukrainian writers are extremely law-abiding citizens.  Admittedly, we can’t live without masks on our heads and without trips in car processions of 5 cars. Therefore we are coming ourselves to outside the Lukyanivsk SIZO, having infringed all possible norms of the Kolisnichenko-Oliynyk law [No. 3879, after the two Party of the Regions authors], and will be demanding that they arrest us for this. After all an artist’s place is in prison, and this glorious tradition has lasted from Taras Shevchenko to Vasyl Stus”.

The writers, including Anatoly Dnistrovy; Ludmila Taran; Natalka Poznyak; Artem Zakharchenko, as well as civic activists and journalists came wearing masks, or, depending on what took their fancy, saucepans or bowls, and erected a tent outside the Lukyanivsk SIZO.

Other protests so far include a person from Lviv who wrote to the SBU [security service] saying that he and friends always go to the banya [sauna] on Saturdays in 6 cars. Can they please have permission?

There is also the sign around for car windows reading: Don’t get behind me, I’m the fifth”.

On Sunday former political prisoners are planning to appear at the SBU and tell them to arrest them first.  Similar actions are planned in a number of cities.

It remains to be seen what happens next following Yanukovych’s signing of monstrously illiterate, unconstitutional and repressive laws.  On the other hand, those already announcing that the west “has lost Ukraine” would do well to consider who they will be letting down with such hasty conclusions. 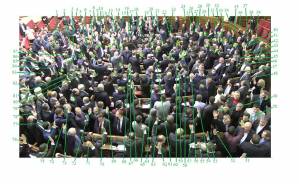