More reports of journalists under fire 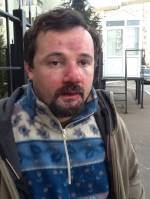 Radio Svoboda cameraman Ihor Ishakov after being detained and supposedly questioned as a witness.  He and Dmytro Barkar were detained just after they videoed footage of a police officer aiming and shooting directly at them

A Channel 5 cameraman, Ivan Nakonechny is the latest member of the press to have been shot at by Berkut riot police on Hrushevsky St.  Nakonechny says that he was there to follow what was happening, and was filming, standing behind a shield.  The bullet thankfully hit the video recorder, not him.

TSN journalist Natalya Pisnya was less lucky and received a bullet wound to the leg while covering the events on Hrushevsky St.

There are an increasing number of reports that journalists are being deliberately shot at. In the first video here, a journalist explains that he demonstrated that he was from the press and then the police took fire.

Two Radio Svoboda journalists were detained at around 8.00 on Monday morning, then taken to the Darnytsky police station.  Radio Svoboda reports that cameraman Ihor Ishakov has just been released. “His face is covered in bruises, hs clothes in blood and it looks as though he has a broken nose, and may have concussion. One of the journalists had managed to ring the studio a little earlier.  He was asked if they had been beaten and went silent.  The question was rephrased, so that he could answer yes or no.  He said yes.

A representative of the police station told Radio Svoboda that the other journalist detained, Dmytro Barkar, should be released shortly. She said that the two “were not detained, that they have been questioned as witnesses”.

The two journalists were detained just after they videoed footage of a police officer aiming and shooting directly at them.

Some of the other reports suggest that Berkut officers have once again used gratuitous levels of violence.  It would be difficult to assert that they have been more brutal than to others, but the fact remains that they have used violence in situations where they knew the people to be journalists.

On Jan 19 Berkut officers shook a bus in which journalists were standing and when Channel 5 cameraman Denis Savchenko fell, they ripped his press badge off and dragged him to the police van.  Channel 5 journalist, Andriy Zhyhulin who was working with Savchenko explained to the Institute for Mass Information that in order to see what was going on, a lot of the journalists and cameraman had climbed onto the buses.  In Savchenko’s case, he was standing on a bus clearly marked as Press.  Zhyhulin asserts that at a particular moment the Berkut officers got annoyed with being filmed and started shaking the bus.  Two cameraman lost their balance and fell, including Savchenko.  Zhuhulin is convinced that the riot police knew who they had seized – as well as the badge that they ripped off Savchenko, he had a Channel 5 microphone, while the other cameraman was in a jacket with the word PRESS on it.

As of 15.00, the IMI list of journalists injured contains 24 names. Many have wounds caused from stun grenades.

As reported, former deputy head of the SBU [Security Service] says. SBU Lieutenant General Oleksandr Skipalsky has told Radio Svoboda that the combat grenades used by police against protesters on Hrushevsky St are for use against terrorists and criminals.