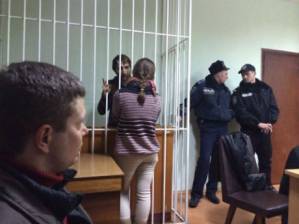 Three EuroMaidan activists have been remanded in custody for two months, charged with “organizing mass riots” over the events on Hrushevsky St which all deny taking part in.  There have been violent clashes since trouble broke out on Jan 19 and clearly not all prosecutions can be automatically treated as persecution. On the other hand, certain features of the court hearings seem to bear an ominous resemblance to the badly flawed prosecutions which followed the Dec 1 disturbances on Bankova St.

The alleged role of “titushki”, or hired thugs, in the detention of the three men gives further grounds for concern.  As reported, a large number of young men, euphemistically referred to as of athletic build, and otherwise known as titushki, have been highly active over the last few days, picking fights, smashing cars, and generally increasing the level of violence in the capital.

One of the three men, Dmytro Moskalets told Ukrainska Pravda that during the early hours of Jan 20 he and two other activists – Artur Kovalchuk and Yukhim Dyshkant – got into a scuffle near the metro station Arsenal with a group of around 12-15 titushki.  Moskalets asserts that the latter provoked the scuffle and smashed Kovalchuk’s face in after he tried to call out for the police.  Kovalchuk has a broken nose.

The titushki, Moskalets asserted, then announced that they were calling the police.  Instead a Berkut riot police unit turned up and took the three activists to the police station.

All three are charged under Articles 293, 294 and 295 of the criminal code (group infringement of public order; mass riots; call to actions which threaten public order).  Article 294 can carry a sentence of 4 to 15 years.

They are alleged to have provided other protesters with inflammatory substances; been in bullet-proof jackets and incited people to riot.

The hearings in the Darnytsky District Court were attended by opposition MPs, including Lesya Orobets and Mykola Knyazhytsky, who offered to stand as guarantors for the three men.  This was rejected and judge Natalya Kyrychenko remanded all three in custody for 2 months.  Kyrychenko apparently refused to hear witnesses for the defence and only took into account the three prosecution witnesses, all of whom are Berkut riot police officers.

Yuhim Dyskant is a young poet who talks about his work and love for literature in the following interview.

Dmytro Moskalets is a musician and the organizer of a film festival.  He can be heard discussing his work here.

A love of poetry or music does not per se prove that a person could not have taken part in riots, and the men may not be telling the truth.  The feeling of déjà vu, however, is strong.  With such echoes from the hearings back on Dec 3 in the cases of the first 9 “Bankova Prisoners” , these detentions warrant very careful scrutiny.