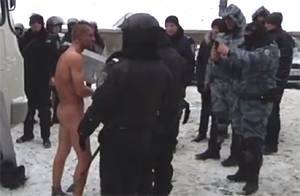 Opposition MP Andri Parubiy says that the man is Mykhailo Havryliuk.  He was found after the video was made public and is now in the self-defence headquarters on Maidan where he is receiving medical aid.

The video shows the Berkut officers undressing the man outside with the temperature likely to have been around minus 7 or 8, if not colder. He was then filmed naked.   He was then taken to a bus, and the images show that he has huge bruises,  Ukrainska Pravda asked for comment from the Interior Forces press service regarding the video dated Jan 23, and to know who the head is of the No. 228 unit whose helmet one of the men in black uniform is wearing. An answer was promised, but there is no sign as yet that it has been received.

The minister Vitaly Zakharchenko is said to have addressed the staff of interior ministry bodies, stressed that such actions are unacceptable, ad also called on them to observe the law.

It sounds good, but this is one of numerous cases where the police have clearly used unacceptable force and/or torture against protesters.  There is only denial or lies when the evidence is not so incontrovertibly damning.

The number of people who have disappeared is rising all the time.

The body was found yesterday in the Boryspil forest of Yury Verbytsky, a seismologist by profession and civic activist.  His abduction from a hospital, together with Ihor Lutsenko, is widesly believed to have involved enforcement officers, or people close to them.

The use of Berkut officers, especially during the savage dispersing of peaceful protesters on Nov 30, has been a major reason for the calls for Zakharchenko to be dismissed.  These calls have been ignored by Viktor Yanukovych and his people, and all that are seen are such “apologies” when caught out by video footage.