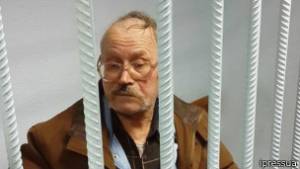 Mykola Pasichnyk, a 72-year-old pensioner has been remanded in custody for 2 months on suspicion of attacking Berkut officers.  Seemingly of assaulting more than one of these specially trained, fit and considerably younger riot police officers.  This is the most shocking but not the only indication that detention is part of an attempt to use hostages in negotiations with the EuroMaidan protesters.

The detention order was issued, on the application of the prosecution’s office, by judge Yulia Shvachach.

Mr Pasichnyk became unwell during the court hearing and was taken away by ambulance.  His son told the BBC Ukrainian Service that his father is accused of extremist activities, harming police and Berkut officers and throwing explosive devices. Such actions require physical strength and the use of both arms, whereas his father has lost full control of one arm.

Denys Pasichnyk says that his father came to Kyiv for the Unity Day procession on Jan 22 and to see him. He told his son that he saw some clashes beginning when he arrived in the centre and walked up to Hrushevsky St to see what was happening. He didn’t have time to run from approaching Berkut officers who began beating him, and then took him to the police station.

He is presently in hospital but according to the court order will be moved to SIZO [remand prison] when his gets better.

Judge Shvachyn thus ignored all the arguments regarding the physical possibility of the 72-year-old having committed the offences he is charged with, as well as sheer commonsense.

It is worth noting the “offer” made by Prosecutor General Viktor Pshonka on Jan 23.  He effectively promised that the prosecutor would ask for restraint measures not involving detention if “radical” elements stopped their protests and freed Hrushevsky St.

This prompted a swift response from advocate and Executive Director of the Ukrainian Helsinki Human Rights Union, Arkady Bushchenko.  He published an open report of a crime addressed to the Interior Minister, the Head of the Security Service and Prosecutor General.  In it he outlines the relevant parts of the Criminal Code that the behaviour of the Prosecutor General falls under though this treatment of people arrested as hostages.  Bushchenko’s initiative has already been followed by many other human rights activists.

The number of people remanded in custody on questionable charges linked with the EuroMaidan protests is increasing by the day.  There are serious grounds for believing most to be pulled out of the air. 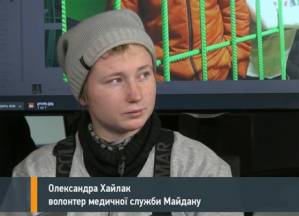 This, as reported, received effective confirmation in the appalling treatment meted out to a young EuroMaidan volunteer, Oleksandra Khailak.  She was stopped at the railway station by ordinary police and asked to show her documents.  As she was getting these out, her EuroMaidan volunteer badge fell to the ground.  Berkut officers were called and took her away.  None of the police stations wanted to take her, and in the end the Berkut men simply dumped her in the forest with the temperature outside at around minus 10.   She can be concerned “lucky”: she was not beaten, and the officers at least left her mobile telephone enabling her to get help.

The number of those less fortunately is increasing by the day, fuelled especially by total impunity for those taking part in mounting repression.