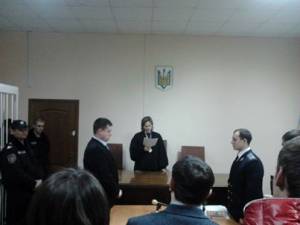 Dmytro Yurchenko has just been remanded in custody for 30 days for alleged “extremist activities”, otherwise known as transporting tyres in his car. He had as many as 20 of these seditious items in the vehicle.

This was sufficient on Jan 26 for the prosecutor to accuse Yurchenko of “organizing mass disturbances” and for Solomyansy Court judge Svitlana Kushnir to issue a 30-day detention order.

Yurchenko was detained on Jan 24.

It is highly likely that the tyres were being brought to the barricades on Hrushevsky St where they would be set alight.

The investigators have, however, jumped considerably further and state that “on 19.01.2014 individuals who have not been identified by the pre-trial investigators organized a mob of around 3 to 5 thousand people to carry out mass disturbances. D. Yurchenko and other unidentified individuals were among them”.

A similar 30-day sentence was issued in the case of Mykhailo Ovsiyenko who was detained on Jan 24, with even less clarity (in fact, none) as to the specific grounds for the detention.

These are not the only such arrests arrest over the last week.

On Jan 22 the Dniprovsky District Court in Kyiv remanded Volodymyr Karahyaur, a journalist from the Internet publication “Spylnobachennya”, together with Oleksandr and Volodymyr Markus in custody for 2 months.

It is not clear yet which judge allowed the prosecutor’s application, but all efforts will be made to find out as this most severe restraint measure was imposed on the three men after they were “caught” buying petrol.

The investigators clearly decided that they were buying the petrol for the generators on Hrushevsky St.

No evidence that they themselves had committed any offence, yet the judge saw fit to restrict three men of their liberty for 2 months.

As reported, one of the highly repressive amendments to legislation “adopted” on Jan 16 includes criminal charges for something termed “extremist activities” which can mean just about any expression of views critical of those in power.

Over the last week the president Viktor Yanukovych and high-ranking officials have repeatedly called those taking parts in the mass protests “extremists”, and even “terrorists”.