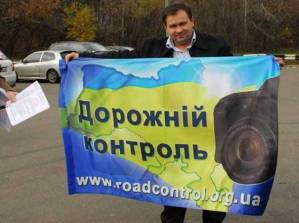 The preposterous charges linked to the Bankova St disturbances have been dropped in accordance with the controversially amended amnesty law, though he is now suspected of having “injured” a traffic police inspector by spitting on him…

The Shevchenkivsky District Court in Kyiv has terminated criminal proceedings against Road Control journalist and EuroMaidan activist, Andriy Dzyndzya and freed him.

This follows the release from custody on Friday of two other “Bankova Prisoners” – Yaroslav Prytulenko and AutoMaidan activist Volodymyr Kadura.  The criminal charges against them and Serhiy Nuzhnenko were also dropped.

The charges were all linked with the disturbances on Bankova St on Dec 1 which are widely believed to have been orchestrated.

Please see: The President’s Bankova Prisoners for more details about the cases as well as the unwillingness to honour the amnesty law which came into force on Dec 25.

The change is linked with highly controversial amendments made to the amnesty law which now covers law enforcement and other officials suspected of involvement in the violent beating of peaceful protesters on Nov 30, and other crimes.

Dzyndzya and Kadura were arrested on Dec 3 and remanded in custody for 2 months.  With absolutely no evidence to back the charges, they were accused of having been behind the commandeering of a bulldozer brought to Bankova St and used in the confrontation with Interior Ministry forces (conscripts).

In a particularly ominous move, Dzyndzya’s lawyer was then arrested and charged with attempted murder of the judge who remanded his client in custody.  At present, Viktor Smaliy remains in detention.

These charges against people closely connected with Road Control coincided with two savage attacks on members, and have been widely interpreted as being aimed at crushing the civic watchdog which monitors infringements by the traffic police.

In another worrying move, Dzyndzya was informed on Jan 8 that he is suspected of a new “offence”.  The incident involved him spitting in the face of a traffic police inspector who then proceeded to hit out at him, with all this having taken place a year ago.  The allegation that Dzyndzya “injured” the inspector would be merely comical were it not taking place at a time when the enforcement bodies and courts are increasingly being used to carry out repressive measures against civic activists and protesters.