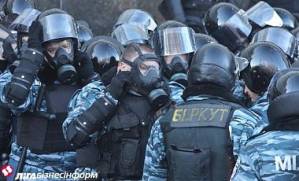 The authoritative newspaper Dzerkalo Tyzhnya reports that according to its information the numbers in special force Grifon and Berkut units are to be increased to 30 thousand men, and the powers of special force units within the Interior Ministry extended.

The protocol decision adopted by the Cabinet of Ministers would thus make the size of the Grifon and Berkut units six times greater.

According to the newspaper’s information, the increase is planned regardless of any moves regarding a state of emergency. At a closed session on Monday, the newspaper has learned, the Cabinet of Ministers passed a number of protocol decisions. As well as the above-mentioned increases, the Justice Ministry would also have the task of legitimizing the creation of voluntary public control squads. Plans are also reported to impose restrictions on movement around 30 streets in Kyiv; to allocate money from the state reserve fund for buying ammunition etc for special units.

The same meeting also prepared documents on imposing a state of emergency, the newspaper reports, and says that voices in favour of more radical actions with respect to the protesters were in the majority.