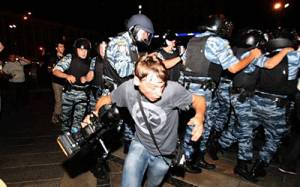 The only charges brought against officials over the brutal dispersing of peaceful protesters on Nov 30 last year have been dropped, turning exchanges of assurances and demands for accountability into a dangerously empty ritual.

A large number of EuroMaidan activists were released from detention on Feb 12 in a move clearly intended to suggest compliance with the so-called amnesty law and reduce fallout from a much more questionable move.  This was mere imitation since most protesters were placed under house arrest, and no charges were waived.  Claims that the withdrawal of charges against top officials over the savage dispersing of peaceful protesters on Nov 30, 2013 were also linked with the amnesty law were equally dishonest. Despite assurances from the president and others, the only heads to have rolled proved to have not rolled very far, if at all.

Faced with outrage and calls for the government’s dismissal and his impeachment, Viktor Yanukovych announced almost immediately that he was dismissing Oleksandr Popov, head of the Kyiv City State Administration and Volodymyr Sivkovych, deputy head of the National Security and Defense Council.  It was announced on Dec 14 that criminal proceedings had been initiated against them; Valery Koryak, head of the Kyiv police and two others.

It was widely believed from the outset that these men were effectively scapegoats and that the order had come from higher.  Andriy Klyuev, then head of the National Security and Defense Council, now head of the president’s administration is often mentioned in this respect.  If the copies of Sivkovych and Popov’s interrogation published in the media were authentic, both men claimed to have been following instructions from Klyuev.  The latter denies any involvement. Since Berkut forces are effectively controlled by the Interior Minister, Vitaly Zakharchenko, demands for his dismissal have also been unabated.

Even symbolic criminal proceedings have now been terminated.  supposedly in compliance with an “amnesty law’.

Before considering that claim, it is worth noting the timing.  Criminal charges over the bloodshed and use of excessive force by Berkut riot police were terminated by the Pechersky District Court in Kyiv on Feb 7.  This was slap in the middle of the visit to Ukraine by Council of Europe Human Rights Commissioner,  Nils Muižnieks.  At a  briefing on Feb 10,  the Commissioner criticized the excessive force used against protesters, and stressed the need for those responsible to be held to answer.  It is inconceivable that Zakharchenko was not aware that the only criminal charges thus far laid had been revoked.

According to Yana Sobolyevska from the Kyiv prosecutor’s office, the criminal proceedings were terminated by the courts in accordance with a law which waived liability for those suspected, accused or convinced of the events in November and December last year.  She asserted that the charges against the men accused fell within this law.

It is disputable whether the charge of exceeding his powers laid against Popov is in the list of offences covered, however there are other much more important questions.  These charges should not have been terminated at all, both because there is no such amnesty law at present, and because their actions cannot fall within its scope..

The original law “On removing adverse effects and preventing persecution and punishment of people as the result of the events during peaceful gatherings” was adopted by a constitutional majority in parliament on Dec 19.  The bill was flawed, but absolutely clear in its intent to waive liability only from those involved in the protests not those who used force to suppress or disperse them.

Flawed and ignored, with the courts following the prosecutor’s office in using feeble excuses to not apply it.  A bill with amendments was then added to the package of repressive laws pushed through parliament on Jan 16. This proposed to wipe the legal slate clean for everybody, including Berkut officers and others guilty of gratuitous violence and human rights crimes against protesters.  Following protest, other repressive laws were revoked on Jan 28, but not the so-called amnesty law.  The next day another law was introduced and passed under heavy pressure from Yanukovych.  As reported, the Jan 29 law in its present state makes all those facing criminal charges for actions after Dec 27 hostages, since termination of the charges is contingent on all public buildings, roads etc. throughout the country being cleared.

Such use of criminal charges as a means of blackmail is in itself unacceptable in a law-based country.  Worse, however: we now find that the only hostages are the protesters.  Those few who were facing prosecution over alleged responsibility for the bloodshed have had the charges revoked regardless of whether or not this second law comes into force. Most are likely to be back at their jobs in the near future.

There are, of course, other arguments against termination of any such charges.  Legal expert Mykola Siry, for example, says that “the state is entitled to waive liability from individuals, for example, protesters, but there are no circumstances, no state of emergency or military action that gives the state the right to waive its own responsibility for maintaining law and order and protecting people’s safety.”

Stern words were heard from the EU, USA and others following the savage treatment of young protesters on Nov 30.  There were demands for an investigation and for those responsible to be held accountable.  Despite fairly clear warnings that failure to do so could lead to sanctions, analyst Amanda Paul has said that without further bloodshed more decisive action from the EU is unlikely.

Ukraine’s leaders have yet again shown that their assurances are given in bad faith.  They have demonstrated to the country’s enforcement bodies and others that impunity will continue.  Under such circumstances, however stern the warnings or emphatic the calls for accountability, more bloodshed is inevitable and the need to sit and wait for it very questionable.