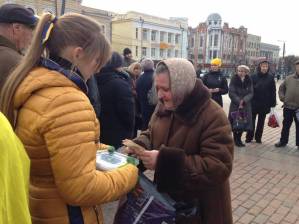 The elderly lady in the photo above was seen by a EuroMaidan Civic Sector activist coming up to a young girl collecting money for Maidan.  In tears, she pulled out 500 or 600 hryvnya, a huge amount for most Ukrainian pensioners.  “Will this definitely be for those who have been hurt?” she asked.

Her hands were shaking so much that she couldn’t get the notes into the collection box, and asked the young girl to help.  Sobbing, she hugged the girl and wished all health and peace.

At this terrible time, it is hard to write the words without tears.

As for those throughout Tuesday night who stood on Maidan, joining in singing the words of the Ukrainian national anthem “Ukraine has not yet perished”

Those who stayed, despite the shooting and very real danger.

Those who have been mobilizing from all over the country.

The lies told by Viktor Yanukoyvch and his people about supposed “extremists” are low and cynical.

It is however likely that they are simply incapable of understanding that people will stand up for their dignity, their children’s future, their country.

The response of the international community is urgently needed.

In words and deeds they will understand.