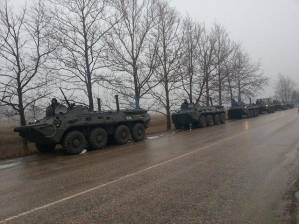 The latest reports from the Crimea are that, as of the early hours of Friday morning, large contingents of “unknown’ individuals have seized the premises of the Mejlis of the Crimean Tatar people as well as the airports in Simferopol and Sevastopol.  In the jigsaw of events on Thursday, the attack on the main representative body of the Crimean Tatars could not be more dangerously provocative.

Some 10 thousand Crimean Tatars on Wednesday demonstrated their determination that the Crimea remain part of Ukraine against an apparently smaller pro-Russian demonstration.  Although two deaths were reported, one was a person who died of a heart attack, the other a woman apparently crushed by the crowd.  There was little confrontation, and the head of the Meijlis, Renat Chubarov, in addressing the Crimean Tatars gathered stressed that this was an orderly and organized rally.  It was he who first reported the seizure of the parliament and cabinet of ministers buildings in Simferopol at around 5 a.m. on Thursday morning.  The armed gunmen were, he reported, in uniform but without anything to identify them.

Mustafa Jemilev, former head of the Mejlis, reported that the gunmen had come from Sevastopol on URAL cars.  Sevastopol is, of course, where the Russian Federation has its Black Sea Fleet.

The SBU [Security Service] asked Crimean Tatars to not go to the government buildings, and this call was apparently heeded.  The fact that the Mejlis has now come under attack suggests that one aim is to actively cause violent confrontation  between pro-Russian groups and the Crimean Tatars.

Such confrontation could then be used to justify Russian measures supposedly aimed at protecting Russian nationals.

Russia has been ostentatiously carrying out military “exercises’ in the Crimea and also mobilizing forces..  The lack of any comment at all to events unforlding on Thursday suggested that these "unknown" pro-Russian gunman had, at the very least, the tacit support of the Kremlin.

Early on Thursday Ukrainian traffic police reportedly forced a column of Russian tanks moving towards Simferopol to turn around. According to a witness at the scene, the tanks stopped near a traffic police post. Those in them claimed that they were planned exercises. After talking with the traffic police, they turned around and went back.  There have been other reports of Russian equipment etc being brought in.

Ukraine’s Acting President Oleksandr Turchynov has demanded  that the Russian military base did not engage in any military exercises outside the military base area in Sevastopol.  “Any movements, especially with arms, beyond that territory will be considered military aggression.”.  The US and EU have also issued warnings to Russia not to interfere.

The whole scenario, as predicted, seems to be aimed at presenting it all as the initiative of pro-Russian groups in Ukraine.  However, as one civic activist, Oleksandra Dvoretska puts it, there simply aren’t enough of these pro-Russian activists for the amount of mobilization seen.

Early in the afternoon, members of the presidium of the Crimean parliament were allowed into the building and the question of  a referendum on the Crimea’s status placed on the agenda.

This resulted in a vote to hold a referendum on the same day as the nationwide presidential elections, May 25. The same session dismissed the government and came up with  a new government and prime minister from the Russian Unity party.  The latter, Sergei Aksyonov, announced that he would show allegiance to Viktor Yanukovych and asked for support from Russia.

This is just one of the developments which suggest that events are being orchestrated.  They coincided with the apparent reappearance of Viktor Yanukovych in Russia who is expected to give a press conference on Friday.  If the statement is genuine, Yanukovych is claiming to still be president of Ukraine and to be the victim of the actions of “extremists”.  He seems to have been guaranteed security by Russia which has also refused over recent days to recognize the legitimacy of the new administration in Ukraine

There is an especially worrying part of his statement, namely:

“It is becoming clear that the people in the south-east of Ukraine and in the Crimea do not accept the chaos and effective lawlessness in the country when the leaders of ministers are elected by a crowd on the square.

I as president did not permit the armed forces of Ukraine to intervene in the internal events taking place.  I order this now as well.

If anyone issues such an order to the armed forces and enforcement bodies, such orders will be unlawful and criminal.”

The letter mentions Ukraine’s armed forces.  One of the alarming features of the statements from the Kremlin has been the suggestion that Russia will intervene to “protect its nationals”.  This was the scenario it first used in the war with Georgia over South Ossetia.

Yanukovych is supposed to be giving a press conference in Rostov on the Don on Friday.

If Yanukovych has gone to Russia and is given refuge, Russia will be ignoring an international wanted order in connection with alleged responsibility for the use of police snipers against unarmed protesters in the centre of Kyiv on Feb 20 (and to a lesser degree over the previous two days).

The use of such snipers it should be stressed, is corroborated by all video footage.  It is not, however, the information which the Russian public are receiving from television and media reports in general.  These try to present him as having been ousted by ‘extremists.  In fact a new administration was elected by parliament because Yanukovych disappeared on the evening of Feb 21. Video footage shows trucks being loaded and leaving his sumptuous estate at Mezhyhirya, and a helicopter presumably transporting him.  The statement issued on Thursday is only the second time he has surfaced since disappearing, with even the term "surfaced" to be understood loosely since on neither occasion has it been clear where he is at that moment.   In the unprecedented vacuum that emerged on Feb 22 following the disappearance of Yanukovych, the prosecutor general Viktor Pshonka, Interior Minister Vitaly Zakharchenko and other top officials, emergency measures were taken. Oleksandr Turchynov is acting president and elections have been called for May.  It is only the Russian Federation which has criticized the new administration.  It remains to be seen whether and how much they support Yanukovych’s claims.

The plan may well be that they don’t have to since the supposedly new government elected in a  building under siege has said that they answer to him as president (in hiding …).

“The seizure of the Crimean parliament by spetsnaz [special purpose forces] from Sevastopol is the latest step in enacting a long prepared 4th scenario for dismembering Ukraine.

And, of course, this is terrorism.

All the rest is from that Putin plan, as predicted: local authorities; agents; passports; the criminal Yanukovych “emerging” and giving “orders’ to the parliament.

And now also the seizure of parliament. I hope that the situation in the Crimea and Simferopol can, albeit with difficulty and not immediately, be regulated. Unlike that of Sevastopol.

Putin has nonetheless decided to get his Sudentenland.  This will cost Russia very dear."

The cost to Ukraine is also serious.