The Crimea is our Home: Get your troops out! 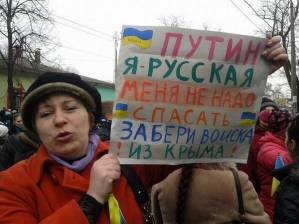 PUTIN, I’M RUSSIAN. YOU DON’T NEED TO SAVE ME. GET YOUR TROOPS OUT OF THE CRIMEA!

From 15 - 20 thousand women and children marked international women’s day in the Crimea by affirming their support for one united Ukraine and their opposition to Russian military intervention and war. 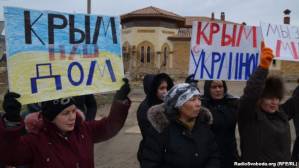 THE CRIMEA IS OUR HOME!

Radio Svoboda reports that in almost a thousand places in the Crimea the women and children formed live chains along Crimean roads. They waved Ukrainian and Crimean Tatar flags, and in some places yellow and blue balloons.

The demonstrations were initiated by Crimean Tatar women’s organizations, however they were attended by many ethnic Ukrainians, Russians and others.

Participants told journalists that there were only women and children in order to avoid provocation.

It is widely believed that the Kremlin hoped to provoke violence in the Crimea which it would then use to try to justify military action, purportedly “in defence of Russian nationals”.

It has not succeeded, and its military intervention has been internationally recognized as unwarranted aggression against a sovereign state. 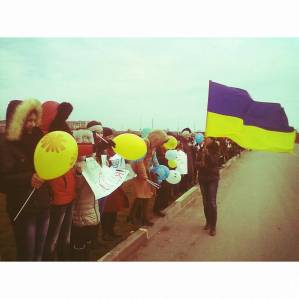 The protests together received wide coverage in the Polish media and next to none from the major international press agencies.  Maybe the story is not "big" enough or the EU countries – Germany, France and the UK – who are reluctant to impose proper sanctions against Russia prefer not to know.

The voices of opposition – from the entire Crimean Tatar people, and very many other Crimeans -  to Russian aggression and the actions of a puppet government need to be heard.

Almost 140 thousand Ukrainian Russians and Russian-speakers have signed a petition informing Vladimir Putin that they do not need Russian “support”.

With all due respect for your concern, therefore, we would ask you to not raise an internal question for our country which is not a burning issue for us at Russian Federation state level.   Not to mention bringing troops in to regulate a conflict which you may see, but which is not visible to us.