Urgent Appeal from residents of the Crimea

The following appeal is addressed to Ukraine’s Acting President, the Prime Minister; MPs; the Human Rights Ombudsperson.   Given Russia’s military intervention which is in breach of the Budapest Memorandum and international law, the demands need to also be addressed to western countries

It is slightly abridged for ease of reading, and explanations added (in italics).  A scan of the original can be found below.

At the present time in the Crimea, unidentified armed individuals are blocking the work of administrative institutions; unauthorized control points have been set up on Crimean roads and exit from the Crimea blocked by unidentified armed individuals (Crimean self-defence units; Russian soldiers; Russian nationals; former Berkut riot police officers).

Sergei Aksenov has publicly stated that he is in total control of the situation and of the activities of the enforcement bodies.  On March 6 the Crimean parliament passed a decision to join the Russian Federation and scheduled a Crimea-wide referendum for March 16 in order to get this decision confirmed. First deputy prime minister, R. Temirgaliev has stated that they expect 70% of Crimeans will vote to join Russia.  He also claims that the Crimea is already a part of the Russian Federation and that all Ukrainian military in the Crimea are considered occupiers.

In many Crimean cities young men of athletic build are being seen at mass gatherings. They claim to represent local self-defence units or the Crimean Guard.  Among the leaders and members of such units are members of the Night Wolves bike club (or people claiming to be them).  They are obstructing journalists carrying out their work; taking part in the blocking of Ukrainian military units; and obstructing peaceful anti-war demonstrations as well as those in support of Ukraine’s sovereignty.

Crimean residents report that local activists have been abducted and local businessmen killed. The law enforcement bodies are not taking any action.

According to official information from Ukrainian Railways [Ukrzaliznytsa], the sale of tickets to the Crimea has been suspended for unspecified technical reasons. It is impossible at present to buy tickets for trains leaving the Crimea.  The nearest date that you can buy a ticket leaving the Crimea is March 18, though the information source said that this could change tomorrow.

The appeal ends with a request for information regarding measures being taken by the Ukrainian authorities to ensure safety and organize the evacuation of civilians.  They demand to be informed of the procedure for humanitarian aid or evacuation due to: 1) possible military action; 2) a wave of crime in conditions where there is effectively no protection from the law enforcement bodies; and 3) if the territory of the Crimea comes under the jurisdiction of another state.

They ask for public statements from Ukraine’s leaders and information about measures taken to protect the rights and ensure the safety of people in the Crimea. 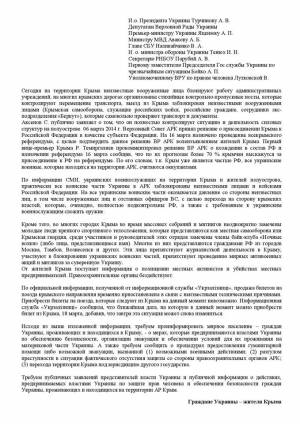