Scurrilous rumours used to spread fear and distrust in Eastern oblastsAutoMaidan activist shot at near ChongarRussian troops already deployed in mainland UkraineThe Crimea is our Home: Get your troops out!Crimean "referendum" a grotesque farceCrimean Tatars call on all Crimeans to boycott "referendum"Avoiding Ukraine’s language minefieldsChief Rabbi and others dismiss Putin’s “anti-Semitic extremist” claimsRussian propaganda must be challengedWestern Media: Don’t distort the situation in Ukraine!Russia’s aggression poses dangers beyond Ukraine’s bordersCrimea: Anti-Semitic card and other provocation in time of siegeMr Putin: We ethnic Russians and Russian speakers don’t need protectionDangerously orchestrated Crimean exerciseRussia claims threat to its interests and life of Russian nationals in UkraineBlood and Berkut Sniper Bullets on the President’s HandsMustafa Dzhemiliev on Maidan: I’m proud of you, dear fellow UkrainiansBerkut snipers aimed at protestersWaiting for more bloodshed?Open threats and covert plans as ‘hostage law’ deadline nears
• Topics / Politics and human rights

When fists are flying, most press agencies play safe with words suggesting joint responsibility like “clashes” and “scuffles”.  Video footage, reports from witnesses and civic organizations suggest a different, more sinister slant on Thursday’s violence in Donetsk which left at very least one person dead, and more than 50 injured.  Even more sinister is the report from the Russian Foreign Ministry which presents a totally different version with the conclusion spelled out that Russia may take action to “defend” its nationals.

Early Thursday evening between 500 and 1, 000 people gathered for a demonstration in support of Ukraine’s territorial integrity and against war. They were heavily outnumbered by around 2, 000 pro-Russian demonstrators.   The anti-war demonstrators were pelted with eggs and firecrackers, but there was no major trouble until the demonstrations ended.

Video footage, for example, here seems to confirm the accounts from witnesses, and Donetsk News, that the aggression came from the pro-Russian side: http://youtube.com/watch?v=iNqcwSwnybU

Some of the anti-war demonstrators managed to get away, flanked by the Donetsk self-defence unit.  Those 40 people were, however, defenceless against a crowd of nearly a thousand aggressive pro-Russian demonstrators, many of whom had come armed.

One female witness recounts how she was around 20 metres away and could only watch, frightened to move: “Maddened people with sticks, bars and knives hurtled from side to side, smashing up a police bus, beating people up.  At one point everybody began running along Leninsky Prospect away from Macdonalds.  The pro-Russians chased our people, threw them to the ground, kicked them. I’ve never seen anything like it. I wasn’t even terrified for myself, but for those being kicked. You know that you can’t help when ten guys are attacking somebody lying down.”

The Russian Foreign Ministry statement issued on March 14 claims that “peaceful demonstrators who had come out onto the city streets to express their attitude to the destructive position of those calling themselves the Ukrainian government were attacked by rightwing radical groups armed with shock pistols and bats who had begun arriving in the city the day before from different regions of the country. As a result of the confrontations there were a large number of people wounded, one person died”.

This version of events is refuted not only by witnesses, but by considerable video footage.  It is also difficult to explain why the person killed and overwhelming number of people injured were those asserting Ukraine’s territorial integrity and protesting against the military intervention in the Crimea. 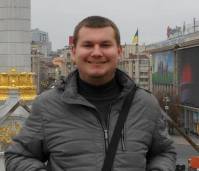 The one named victim received fatal knife wounds. Dmitry (Dima) Chernyavsky was 22 and, according to an acquaintance, Denis, writing on Facebook, “a harmless, slightly shy young guy, no fighter, no radical.  His mother was expecting him home today, but he didn’t come.”

He seems to have been a member of the rightwing VO Svoboda party – “the enemy”, according to Russian propaganda.  Claims that these are the fascist hordes whom Russia has to protect its nationals, as well as right-thinking (pro-Russian) Ukrainians from have been dismissed by western countries and do not stand up to scrutiny.  Unfortunately, however, the mass audience in Russia, and Ukraine’s eastern oblasts have long been fed such lies and they don’t even think to probe them.  They don’t ask, for example, why the propaganda claims that the “fascists” and “neo-Nazis” are those from the EuroMaidan movement and in power in Kyiv, and treats Pavel Gubarev, the self-proclaimed pro-Russian “people’s governor” as a persecuted hero.  The latter, together with many of his supporters are known for close ties to Russian neo-Nazi organizations.

Thursday’s bloody confrontations will probably inspire a new round of reports in the western media about the supposed great divide between East and West.  This is a ready-made feature and much easier than probing deeper, though in fact you don’t need to delve very deep.

As well as the untrammelled propaganda on pro-Russian media sources, there have also been rumours deliberately circulated to heighten local fears and antagonism towards the new administration in Kyiv and EuroMaidan.  The latest rumour claims that miners and others in the Donetsk oblast will have to pay up to 10% of their wages “for the restoration of Maidan”.

Russia’s leaders have received too many unpleasant surprises from Ukraine of late, and are not relying on propaganda alone.  Large numbers of “Russian tourists” – of a specific age, athletic build and general thuggish appearance – have been brought into the Donetsk and Luhansk oblasts by the busloads..

They have doubtless found support from home-grown louts.  Titushki or government hired thugs were used very actively by the Yanukovych regime against the EuroMaidan movement, and are almost certainly being given a role here.  While the police are no longer actively taking sides, they are not reacting as strongly as they should.

According to Oleksandr Bukalov, head of the human rights organization Donetsk Memorial, “this all looks like a well-prepared scenario with the conclusion (for Putin) being that there is no order in the east, that people are not safe, and in order to avoid new deaths….”.

The Russian statement leaves no room for doubt that this is the scenario planned.  Its statement concludes with the claim that the government in Kyiv is not “disarming fighters, ensuring the population’s safety and their legitimate right to hold rallies”. “Russia recognizes its responsibility for the life of its compatriots and fellow nationals in Ukraine and reserves the right to take people under their protection”.

The claims that direct or indirect military intervention is needed to “protect” people are all too familiar.  Attempts to use this scenario in the Crimea, together with the request for “help” from the puppet government under Sergei Aksenov, have met with deserved scepticism by the West.  It is no accident that this death and open violence has come just days before the Crimea’s pseudo-referendum.  There is strong evidence that it is all being orchestrated, and the closest scrutiny is urgently needed of what is proving to be a very dirty war. 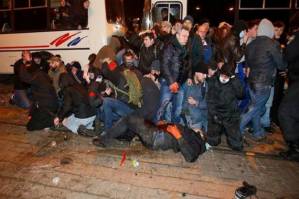