Donetsk Front in Putin’s Dirty WarScurrilous rumours used to spread fear and distrust in Eastern oblastsAutoMaidan activist shot at near ChongarRussian troops already deployed in mainland UkraineThe Crimea is our Home: Get your troops out!Crimean "referendum" a grotesque farceCrimean Tatars call on all Crimeans to boycott "referendum"Avoiding Ukraine’s language minefieldsChief Rabbi and others dismiss Putin’s “anti-Semitic extremist” claimsRussian propaganda must be challengedWestern Media: Don’t distort the situation in Ukraine!Russia’s aggression poses dangers beyond Ukraine’s bordersCrimea: Anti-Semitic card and other provocation in time of siegeMr Putin: We ethnic Russians and Russian speakers don’t need protectionDangerously orchestrated Crimean exerciseRussia claims threat to its interests and life of Russian nationals in UkraineBlood and Berkut Sniper Bullets on the President’s HandsMustafa Dzhemiliev on Maidan: I’m proud of you, dear fellow UkrainiansBerkut snipers aimed at protestersWaiting for more bloodshed?
• Topics / Politics and human rights 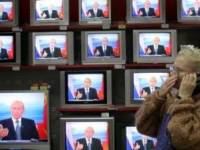 The West’s "robust response" to Russia’s annexation of Ukrainian territory has so far provided only entertainment value for the Russian propaganda machine.  One of the supposed heavyweights on the US blacklist -  Vladislav Surkov - has been reported widely on Russian TV as saying that he is "flattered" by US attention.  Many of those on the list may not have western bank accounts to freeze, while those who do have been omitted.  This fine message follows that received on Feb 27 when Ukraine and its neighbours discovered that a legally binding commitment (made with the Budapest Memorandum) to guarantee Ukraine’s territorial integrity if the latter gave up its nuclear arsenal meant as much, or as pitifully little, as all western statements of deep concern and strong condemnation.

Russian propaganda has, unfortunately, received support from unexpected quarters.  In a more hands-on response to Putin’s annexation show in Moscow on March 18, several Ukrainian MPs from the rightwing VO Svoboda party physically coerced the head of the state-owned UTV-1, Oleksandr Panteleimonov to write a letter of resignation. Panteleimonov played a direct role in the flagrant distortion of information regarding the EuroMaidan protests, and the Stop Censorship movement had good grounds for accusing him, together with others, of having the blood of slain protesters on his hands.  This does not change the foreseeable coverage that such thuggish methods will receive on Russian TV.  These, we can safely assume, will assure Russians, and Crimean viewers, that the "fascists" in Kyiv are a menace.

Kremlin plans for intervention in the Crimea and full engagement of its propaganda arsenal began some time ago.  Media monitoring reports that the Russian media were closely following the situation in the Crimea and Sevastopol from the beginning of the EuroMaidan protests in late November 2013.  The most notorious Russian channels which were widely viewed in the Crimea and East of Ukraine, like ORT, Rossiya and NTV, pushed the idea that support for Viktor Yanukovych in the Crimea was linked with the wish of Crimeans to retain and deepen links with Russia. These ties, viewers were constantly told, were being jeopardized by the anti-government protests.  The same channels followed Vladimir Putin in lying about a supposed "orgy of nationalists, extremists and anti-Semites on the streets of Kyiv" following the change of government. The lies were - and continue to be - ladled on thick, with gross distortion of facts preferred to fakes and total fiction, although the latter can also be found in abundance.

The hysterical propaganda reached such a crescendo that it did get noticed by western governments, even occasionally by the western media.  It also prompted another decision in Kyiv which only fuelled the propaganda machine, though not necessarily fairly.   On March 11 Ukraine’s National TV and Radio Broadcasting Council ordered all cable operators to stop transmitting four channels: Rossiya 1; ORT [Channel One]; NTV and the news channel Rossiya 24.  The Council stated that the channels were a threat to national security.

They almost certainly were a threat however the ban created bad publicity, while not particularly achieving its aim. The puppet government in the Crimea had already replaced almost all Ukrainian channels with Russian ones, and certain Ukrainian channels had not in any case renounced the methods of distortion and lies which became so prevalent under Yanukovych.   Russia’s Foreign Ministry lost no time in accusing Ukraine of "persecuting Russian journalists and restricting freedom of speech in Ukraine’s media.  It called on the OSCE Representative on Freedom of the Media "to give a swift and unbiased assessment".

Dunja Mijatović reacted the same day, expressing concern "about new steps to restrict media plurality in Ukraine".  In saying that she was repeating her call not to initiate repressive measures, she was possibly referring to a previous statement from March 8, criticizing "the continuous closure of television channels and attacks on journalists in Crimea".

Over the last three weeks Moscow has gone all out to orchestrate a mirror image of the EuroMaidan protests and then condemn "double standards" in treatment of them.  This has been especially marked in eastern oblasts, for example, Donetsk and Kharkiv, where disturbances and the storming of local administration buildings appear to have been instigated by young louts brought in from Russia.

Both the ban on channels and Tuesday’s forced resignation of Pantaleimonov were pure gifts to Russia. They create an impression of symmetry which is almost entirely false. Since the Russian invasion and installation of a puppet government, the Institute for Mass Information has reported over 70 violations of journalists’ rights in the Crimea, including abductions and serious assault.  Many have been directly attributable to the authorities or Berkut special force officers. The pro-Russian government removed access in Ukraine to Ukrainian television channels. This is not equivalent to attempts, at a time when Ukraine has effectively been invaded, to restrict freedom to the media and journalists of the aggressor state who are disseminating demonstrably false information aimed at stirring up fears and antagonism

Mijatovic stresses that she "deplores any kind of state propaganda and hate speech", but insists that "any potentially problematic speech should be countered with arguments and more speech.”

All of this is undoubtedly laudable and correct in theory, as are the western media reports which give "both sides of the argument" with total lies about anti-Semitic attacks, fascist laws etc, being reported as one possible point of view against those who happen to hold an alternative position.

In the present situation such a stand is as impotent as the sanctions so far imposed in response to a real and grave danger to Ukraine’s territorial integrity and stability.  This does not mean that the west should endorse restrictive measures which, in the case of the ban, were not necessarily the best option anyway.  European bodies and the OSCE could, however, respond more proactively to constant barrages of lies, as did the US State Department on one occasion.

It is also difficult to understand why the OSCE representative on media freedom has been totally silent about the repressive measures taken during the same period by the Russian authorities against the Internet sites www.lenta.ru; www.grani.ru; www.kasparov.ru; www.ej.ru; and #39;s actions with respect to Ukraine and attempts to stifle them surely also warranted "expressions of concern"?

The reason given for the warning issued to Lenta.ru is particularly worthy of note. The website which was one of an ever-dwindling number of reasonably independent Russian information sources published an interview on March 10 with a member of the Kyiv branch of the Ukrainian right wing movement Pravy Sektor. It included a link to a 2008 interview given by the head of the movement Dmytro Yarosh in which the latter stated that "sooner or later we are doomed to fight the Moscow empire."  This was deemed by the supervisory body Roskomnadzor to constitute "dissemination of extremist material" and contain statements aimed at inciting ethnic enmity. So much for "media plurality", but there’s more. The Russian authorities have placed Yarosh on the international wanted list over a supposed appeal for help to the Chechen militant leader Doku Umarov.  The media report of this appeal was refuted the following day by Pravy Sector who said that their VKontakte account had been hacked with the fake appeal appearing during that period.  Despite evidence corroborating this, and the sheer illogic of issuing a public appeal only to deny it the very next day, Russia has insisted on going ahead with the attempted prosecution. Lenta.ru has now sacked the editor and brought in a new person from a pro-Kremlin media source.  This is undoubtedly not aimed at expanding media plurality.

Russia’s behaviour since Feb 27 has flagrantly defied international law and basic rules of play, and thus far only gained from western consternation and ineffectual measures.  No pathos-filled rhetorical questions in conclusion: we all know where this leads.