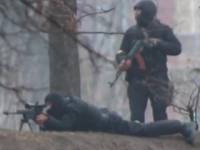 Acting Prosecutor General says the orders to gun down protesters on Institutska St on Feb 20 came from the president’s administration.

In an apparent clarification of rather confusing figures reported earlier, Reuters writes that a spokesperson for the Prosecutor General has said that 12 members of the former disbanded Berkut riot police have been detained on suspicion of involvement in the mass shooting of protesters on Institutska St on Feb 20.

The report on the Prosecutor General’s site quotes Oleh Makhnytsky, acting prosecutor general as saying that investigative measures are being taken by the PGO chief investigator together with the SBU [security service] and Interior Ministry in relation to 9 people. “A number of other people are suspected. Three people have been officially detained by the investigators, and investigative measures are being carried out over a further 6 people and procedural decisions will be taken with respect to them. These are members of a special Berkut unit, the “Red Unit”.  Operational measures, he said, are being taken for the swift arrest of a further four people, as well as establishing and detaining others implicating in the shooting of peaceful civilians.

Maknytsky said that the order came from the president’s administration, via the Interior Ministry, SBU downwards to those who carried out the orders.

The investigators, he asserts, had to begin from scratch since all documents had been destroyed.