Post-Maidan Tale of ImpunityTotal impunity for Ukrainian politician suspected of involvement in killing of journalist Serhiyenko20 years after Gongadze murder, the killers of another Ukrainian journalist are being protectedDangerous arson attack on prominent Ukrainian anti-corruption activistJudge faces criminal charges over obstruction of Ukrainian journalist’s murder trialSuspected killer of Maidan activist and journalist released from custodyWhy is another killing of a journalist in Ukraine going unanswered?Ukrainian investigative journalist in critical condition after savage attackAbducted journalist found murderedShadows of Forgotten RepressionDay of the Ukrainian Political Prisoner 35 years on – what has changed?Vasyl Ovsiyenko, former Soviet dissident and Ukrainian human rights activist on the BBC
• Topics / The right to life 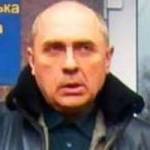 The Cherkasy newspaper Procherk reports that the body has been found in a forest of activist and journalist Vasyl Serhiyenko who was abducted from outside his home on April 4.

Yury Botnar, head of the Cherkasy regional branch of the VO Svoboda party which the dead man was a member of says that Vasyl Serhiyenko was found with a bag over his head, with handcuffs on and with knife wounds.

The police had reported finding traces of blood near the forest, which led them to the body.  The police understand him to have been an AutoMaidan activist (linked with EuroMaidan).

The journalist and Maidan activist was reported by his mother to have been abducted from outside his apartment block at around 20.30 on Friday evening.

VO Svoboda asserts that Serhiyenko had received threats because of his journalist and “patriotic activities” and says that he had written articles exposing a local oligarch and MP (until recently) from the Party of the Regions, Gennady Bobov.  The latter in turn has called on the police to carry out an impartial and fair investigation and has offered a reward of 50 thousand UAH for information.