Panic in Ukraine the work of provocateursAnti-Semitism on EuroMaidan: Not seen, just heard aboutOn the situation with anti-Semitism in the context of civic protestAnti-Semitism as a Weapon of Political TechnologyVaad Ukraine condemns efforts to use anti-Semitism for political gainAnti-Semitic MindsetsDangerous “antifascist” cardThugs assault journalists while police look onOn the danger and cynicism behind the “anti-fascist” events planned for 18 MayUses and abuses of far-right electoral gains in UkraineDangerous AllianceDividing TacticA High price for disillusionmentFor those who couldn’t returnThe Limited Force of Fine WordsTerrible DeceitTrial by HeadlineOthersWithout labelsArson attempt on Mykolaiv Synagogue
• Topics / Interethnic relations 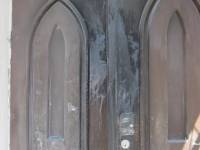 An attempt to set light to a synagogue in the central district of Mykolaiv was thwarted by the swift hands-on reaction of a passer-by. He was driving past the synagogue at around 2 a.m. on Saturday morning, April 19, and saw the flames caused by two Molotov cocktails. He called the relevant bodies, but rather than wait for them, grabbed the fire extinguisher from his car and put out the flames.  On their arrival the police scoured the area and collected the remains of the Molotov cocktail and other evidence.  The door to the synagogue was slightly damaged, as well as a nearby window.

The head of the board of the Mykolaiv Society of Jewish Culture, Mykhailo Goldenberg hopes that CCTV footage will help establish who was behind the attack.

The situation in Mykolaiv is generally calm although residents are afraid of possible acts of provocation. The people’s guard have put up checkpoints to prevent armed bands of separatists and Russian saboteurs from getting into the city.