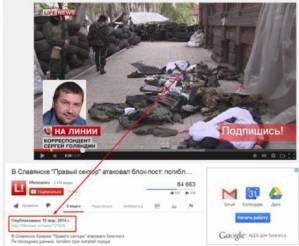 Ukrainska Pravda’s screenshot with the date given as April 19, i.e. before the shootout

The shootout in the early hours of Sunday morning at a militant checkpoint near Bylbasivka on the outskirts of Slovyansk received swift and extensive coverage on Russian television.  So swift in fact that the video of the event may have been made in advance.  Ukrainska Pravda has posted a screen shot of the video shown on Russian Lifenews and posted on YouTube with this dated April 19, although the channel phoned its correspondent who said that the shootout was at “around 1.30 a.m.” on April 20.  The video and report were posted on the Lifenews site at 8.53 a.m. that morning. Such discrepancies are, of course, possible if equipment or a server from a different time zone are used, though why they should be in this case seems unclear.

If the time difference cannot be explained so easily, this will be the second bleep for the Russian propaganda machine in their presentation of the shootout.  Russian TV claimed that a business card belonging to the leader of the right-wing Right Sector party and presidential candidate, Dmytro Yarosh had been found in the totally burned-out car.  Instead of dismay at such a shocking discovery, this caused mirth among Internet users with some hilarious ideas about other places that Yarosh’s business card might be found (like the Sistine Chapel...). The Right Sector has dismissed all accusations of involvement in the shootout.

According to Ukraine’s Interior Ministry the shootout on the road into Slovyansk took place near Bylbasivka at a checkpoint run by supporters of the self-proclaimed Donetsk People’s Republic at 2.20 a.m.  The SBU [Security Service] asserts that the shootout was a “cynical provocation” by “armed criminals and saboteurs who are terrorizing the local population in Slovyansk”. It says that their investigators have concluded that no other groups were present on Saturday night.

Not unexpectedly, the Russian Foreign Ministry statement claims that “innocent civilians” were killed in an armed attack by Right Sector fighters.  It states that city residents seized the assailants’ cars in which they discovered weapons, maps, and Right Sector symbols. The Ministry may have been following the flights of comic fantasy on the Internet since it has not mentioned the business card. It also prefers to avoid the line taken by the self-style people’s mayor of Slovyansk, Viacheslav Ponomarev who told journalists that the weapons were not those available to the Ukrainian military.  This, he claimed, meant that the Right Sector has EU support and is receiving weapons from both the EU and NATO.  Incidentally, the Polish Gazeta Wyborcza reports that journalists were told back on Thursday that an attack by Right Sector was planned for Saturday or Sunday.  On Saturday one of the fighters of the so-called Donbas Volunteer Army assured them that NATO intervention was imminent in the region.

The Russian Ministry does however express “outrage” and claims that the incident “demonstrates the Kyiv government’s reluctance to restrain and disarm nationalists and extremists”.

The Ministry’s “surprise” that this should have happened after the Geneva agreement on April 17 that all parties would “refrain from any violence, intimidation and provocation”, is ingenuous.  The pro-Russian militants stated from the outset that they would not lay down their weapons and vacate the official buildings they’re occupying.   There is ample evidence and video footage that the militants are at very least in possession of the latest weapons produced for use by the Russian military.  The US State Department, Poland’s Foreign Minister Radosłav Sikorski and others have stated that they are aware of involvement by the Russian military and/or security service in the violent seizures by militants over recent weeks.  It seems extremely unlikely that the pro-Russian militants have taken a stand which was not scripted by those in Moscow giving the orders.

Events like the bloody shootout on Saturday night have also been widely predicted both to justify non-observance of the Geneva agreement and to prompt direct Russian intervention.  Ponomarev was swift to call on Vladimir Putin to send in "peacekeeping" troops.  There have been many cases during Putin’s rule where the Russian FSB [security service] has been suspected of orchestrating terrorist attacks used by the authorities to justify major crackdowns.  Alexander Litvinenko,   who claimed that the Moscow apartment block bombs (and others) in 1999 had been organized by the FSB died a hideous death from polonium poisoning in London, with the main suspect, Alexei Lugovoy, a former FSB agent.

The deaths outside Slovyansk on April 20 are real and irreversible.  Any deliberate orchestration is therefore profoundly disturbing, but not, unfortunately, implausible.