CVU: Pro-Russian activists sold information about pro-Ukrainian activists in OdessaUHHRU condemns police role in Odessa tragedyWithout Double StandardsOdessa journalist beaten, his flat set alight for anti-Putin standApplication practice of Article 110 of the Criminal Code of UkraineA brief description of the KHPG strategic litigations in July–December 2020Main suspect in Odesa 2 May 2014 tragedy given high-ranking post in Russian-occupied CrimeaA brief description of the KHPG strategic litigations in January – June 2020Statement of Kharkiv Human Rights Protection Group and ADC MemorialRussia’s most toxic ‘Odesa Massacre’ lie and the help Ukraine is giving itAbout response to the article “There is no coronavirus in prisons. But there is”Interpol cancels search for key Odesa 2 May 2014 suspect who was helped to flee justiceGerman peace prize to Ukrainian journalist Kotsaba is discredited by the Russian lies he parrots, not just his anti-SemitismRussia’s most toxic lies about a fictitious ‘Odesa Massacre’ and the responsibility Ukraine bearsA brief description of KHPG strategic litigations in July – December 2018A brief description of KHPG strategic litigations in January–June 2018Ukrainian court orders that rights activist persecuted in Russia for pro-Ukraine views be granted asylumKHARKIV HUMAN RIGHTS PROTECTION GROUP. ANNUAL REPORT. 2017The day Russia lost Odesa and launched a lethal propaganda lie used to kill in DonbasUkrainian journalist loses defamation suit for criticizing Moreira propaganda film on Ukraine
• Topics / Politics and human rights
• Topics / The right to life

What Russian TV won’t show about the events in Odessa 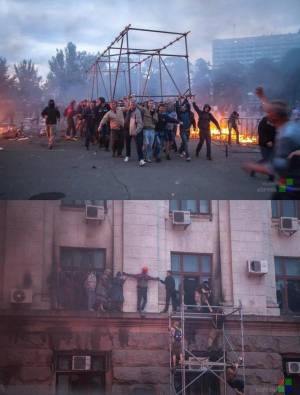 A lot has been reported about the events in Odessa on May 2, and the following is no attempt to repeat reliable chronicles of witnesses, just to add certain points – and certain images - that either get forgotten or which Russian TV channels are assiduously muffling or distorting.

Viewers of Russia Today can easily switch channels – to BBC, CNN, others - and find a markedly different version of events.  This is not the case for the majority of television viewers in Russia and, at present, in some parts of Ukraine, including the Crimea.

They hear only about the fire in the Trade Union House which they are told was set alight by “radicals”, that those who died had tried to escape into the building, and those who survived the fire were then arrested.

They hear next to nothing or a distorted version of the run-up to the fire: the fact that a group of well-armed pro-Russian militants attacked a peaceful pro-unity procession.  Although the procession preceded a scheduled soccer match, there were very many people present of different ages, and levels of interest – or none – in soccer (see the photo). 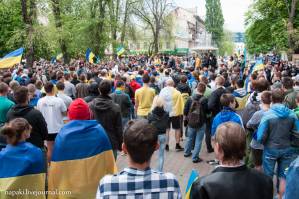 The first person to die of a gunshot wound was one of the pro-Ukrainian soccer fans.  That, according to Serhiy Dibrov, a civic activist from Odessa was when the violence exploded, with people on both sides fighting.   Most of the deaths however were due to the fire in the Trade Union House and that is where a worrying number of questions remain unanswered.

The fire which led to the deaths was on the third floor and contrary to Russian media reports, there is no clarity as to how it began. Nor is there certainty about why the people in the building did not escape and how they died.  The answers offered are  at best speculative.  Russian media have already suggested that some of those who died were actually murdered by the “radicals”.  Others point to the strange positions that some of the dead were lying in and the number of victims. During the fire in the Trade Union House in Kyiv a far larger number were able to escape.  Suspicion is inevitable if only because this second fire in a Trade Union House is apparently a mirror image of the first during the EuroMaidan conflict.  Moscow has been actively trying to present the current disturbances as equivalent to EuroMaidan.  With the pro-Russian militants in eastern Ukraine armed, aggressive and not averse to plundering and other crimes, such arguments have not been persuasive.  This has now changed in the most tragic way possible.  The deaths came in a city which had until May 2 seen little real trouble, and the need for a full and transparent investigation is obvious.

They have no interest in the scenes which Olena Tregub points to on her facebook page:  "When young guys speaking Russian tried to beat a pro-Russian separatist crawling out of the fire  a Ukrainian-speaker, [the "fascist"], was yelling "We are Ukrainians, don’t touch him, he;s been punished enough".  https://youtube.com/watch?v=BfqoWVwmP2Q&feature=youtu.be

They entirely ignore the video footage and photos which make it quite plain that those outside the building tried desperately to save the people trapped.  This was in the absence of the fire brigade which did not appear.

The behaviour of the police at crucial points in the day was even more reprehensible.  No attempts were made to stop the pro-Russian militants from amassing and attacking the pro-Ukrainian protest.  There is also video footage showing a pro-Russian protesters standing behind the police to shoot at people.

None of the above details are in any way aimed at justifying  either side in a conflict that claimed the lives of a large number of people.

However deliberate omission and distortion of the facts are manifestly aimed at stirring up hatred and division.  Attempts to gain mileage out of real human tragedy are profoundly offensive.

On a day when Ukrainian troops were trying to clear the east Ukrainian city of Slovyansk of pro-Russian militants who have terrorised the city and taken a large number of hostages, the focus both in Ukraine and in the world suddenly switched to Odessa.

Odessa would, very clearly, be another “trophy” for Russia’s Vladimir Putin, and is viewed by many Russians as a Russian city.

The weekend’s tragedy, and the Russian media use of it to try to stir up anti-Ukrainian sentiments, also add the south of Ukraine to regions which have been so destabilized that the holding of the presidential elections is jeopardized.

The reasons for Moscow finding the events convenient are not necessarily sinister, but they do make scrutiny of the situation important.

Unlike the Crimea, or even Donbas, Odessa is very much a Ukrainian city.  None of the numerous surveys carried out over recent months found any strong support for “joining Russia” etc.  Nor had any attempts to seize official buildings succeeded.

One of the witnesses to the events, whose account is backed by photos, points out at the beginning of his account that before May 2 there had been no serious conflict between the opposing camps.  Even the day before, he says, a pro-Russian march had not been obstructed at all.

On the other hand, he notes there had been a split within the pro-Russian camp with some moving away from Kulikovo Pole (in front of Trade Union House).  Where he derives his information from is not clear, however something did change and it seems at least possible that this was connected with obvious plans, announced on social networks and, unfortunately coordinated with at least some police officers, to violently disrupt the pro-Ukrainian march.

Disrupt, it should be said, in a very specific manner since at least some of the pro-Russian camp had – and used – firearms,

Investigations into the horrific tragedy of May 2 must find those whose actions directly or indirectly caused loss of life.  That includes those who organized the shift in behaviour of the pro-Russian camp.  With multiple questions remaining about the fire, and obvious attempts underway to use human tragedy for geopolitical ends, answers are critically needed.