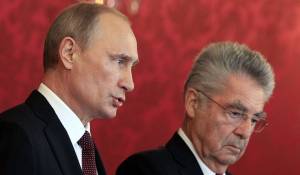 Russian President Vladimir Putin is adept at producing fine-sounding words each time sanctions appear to loom.  The latest was his announcement on Tuesday, June 24, that he would be ‘asking’ the Russian upper house of parliament to revoke the March 1 resolution which authorized him to send Russian troops into Ukraine. The words prompted upbeat headlines and statements about a ‘thaw’ and ‘breakthrough’. They meant next to nothing, but unfortunately seem to have done the trick.  Despite the deaths in two separate attacks of at least 11 Ukrainian servicemen and no evidence at all that Russia is stopping sending fighters, military equipment and arms into Ukraine, Germany’s Chancellor Angela Merkel has warned only that “sanctions could be put back on the agenda”.

Why were they taken off the agenda?

On Wednesday the March 1 resolution was indeed revoked, however headlines like Putin removes threat of military intervention after Ukraine ceasefire and talk of ‘psychologically important progress’ are bafflingly off the mark.

Head of the Russian profile committee on defence, Viktor Ozerov, spelled out the real meaning – or lack of such – himself, saying that the Council of the Federation may once again consider sending troops in if “there is the relevant request from the head of state”.

As we see, this will take less than 24 hours.

Why bother, however, when the formal deployment of troops carries enormous costs, both economic and political, and waging covert warfare is prompting only empty threats?

The missiles which downed a military helicopter on June 14, killing 49 Ukrainian servicemen and crew undoubtedly came from Russia.  It seems likely that the same is true of Tuesday’s downing of a Ukrainian military helicopter, killing nine men.  Tanks and heavy artillery are flowing into Ukraine, together with fighters.  Most are mercenaries, though some have been duped by the Russian media propaganda into believing that they are fighting for a ‘Russian world’, for Russian Orthodox Christianity, against ‘fascism’, etc.

The duping is continuing unabated, and by no means only in the Russian media.  Putin’s gesture over revoking permission he was not intending to use in the near future came together with a clear statement regarding Russia’s general position.  At a press conference following his red carpet welcome in Austria, Putin stated that: “Russia cannot ignore what is happening in Ukraine and made it clear that Russia would do everything it can to protect ethnic Russians in Ukraine and added that Russia would also protect those who see themselves as part of the broader Russian world. Although he said he hoped that it would not take the army to do that.”

He also effectively justified refusal by the Kremlin-backed militants in the east to lay down their arms.

“ President Putin … brought up several issues which show some of the hypocrisy evident in the Ukrainian conflict by mentioning that the Right Sector and fascist groups in the West took up arms and staged an armed coup and but then they people in the east did the same thing to protect their interests and their lives they were labelled separatists.”

The dishonesty is staggering, however there is no evidence that it was pulled up either by his Austrian hosts or by the press.  There is no parity at all between the largely peaceful EuroMaidan protests and the heavily armed militants who have been taking hostages, some of whom have been murdered, and terrorizing the population.

Most importantly NATO, the USA and EU have all recognized that the arms and indeed most of the fighters are coming from Russia.  If the supposed ceasefire agreed on Tuesday morning was never enforced by the militants, Moscow bears direct responsibility.

The Russian media however devoted most of their reports on Tuesday to false claims that it was the Ukrainian military who had continued fighting.

One of the most outrageous was the report on LifeNews entitled: “The outskirts of Slovyansk under fire from phosphorous mines” and stating that “the artillery fire is carried out by armed formations under the control of oligarch Igor Kolomoisky”.  Kolomoisky is the governor of Dnipropetrovsk whose firm measures from the outset have kept the militants out.  The claim about phosphorous, it transpires later in the report, is coming from the militants, however it is not questioned at all.

Quite the contrary. LifeNews reports supposed attacks with the use of phosphorous on June 12.  This is unfortunate since the claims then, made also by Russian Foreign Minister Sergei Lavrov, used old video footage from Fallujah [Iraq] in 2004 as ‘proof’.

The thrust from Putin’s press conference in Austria and from the media on Tuesday was that Kyiv is preventing the peace which Russia is doing everything in its power to achieve.

The visit to Austria was a triumph for Vladimir Putin and Forbes reported on Wednesday that the rouble is now where it stood before any unpleasant words about sanctions were spoken.

No real measures to stop the carnage and suffering in Ukraine have been taken.  The only response from Russia to the militants’ failure to observe a ceasefire has been to step up attempts to show Ukraine as ‘fascist’ and as preventing the Kremlin’s ‘peace efforts’.   Since the Obama administration has just announced that “sanctions aimed at key economic sectors in Russia” may be delayed because of “positive signals” from President Putin, the latter has good cause to celebrate.

Whatever the ‘far-reaching costs’ of Russia’s direct infringements of international law and aggression in Ukraine might have been, the effort required on Russia’s part to avert them is proving pathetically small.