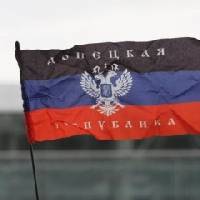 The National Union of Journalists has announced that on June 28 unauthorized information was placed on the website of the union’s Donetsk branch.  This claimed that all media must re-register in the self-proclaimed Donetsk People’s Republic [DPR].

The Union stresses that this information did not come from them. Tetyana Kopozhynska, legal adviser to the union is clear that such demands from the DPR which is, according to Ukrainian legislation, a terrorist organization are illegal.

Telekritika reports that on June 27 the DPR’s press service announced that all Donetsk media publications must re-register with their so-called Information Ministry within the next 10 days.

Their main demands, they say, are that “material published should not contain calls to seize power, or to a violent change in the territorial integrity of the republic.  There should be no propaganda of war, violence or brutality, ethnic or religious enmity”.

Heavily armed fighters of the self-proclaimed ‘republic’ themselves seized control of government buildings. They have been forcing local residents to vacate part of their homes, offices, centres etc for fighters to live in; have abducted a very large number of people and killed at very least 4 of their prisoners, although probably more.

From the outset, the militants have seized television broadcasting towers and / or put pressure on local providers to remove Ukrainian channels and to replace them with Russian ones.  Interfax Ukraine reports that on June 26 because of pressure from militants TV channels ICTV and the municipal Channel 12 were replaced by Russian channels.

A number of newspapers have been forced to suspend publication after direct threats from the DPR and the Luhansk militants who also declared their ‘republic’.  Very many journalists have left the area out of well-founded fears for their lives.