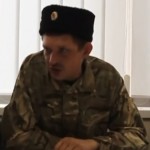 Since phase B of the anti-terrorist operation began, there have been two claims that Ukrainian military have opened fire on civilian targets – in Stanitsa Luhanska and Severodonetsk.

Alexei Svyetikov, head of the Luhansk regional branch of the Committee of Voters of Ukraine writes that while there is still no clear information about Stanitsa Luhanska, they have been able to establish who was behind the shooting in Severodonetsk.  They are convinced that the shooting was carried out by the Kremlin-backed militants controlling Severodonetsk as a deliberate attempt to discredit the anti-terrorist operation [ATO].

Luhansk Regional CVU are asking the OSCE Monitoring Mission to ensure that the OSCE military experts investigate this case where residential homes in Severodonetsk were deliberately fired at.  They hope that if the information is confirmed, the actions will be recognized as a war crime.

According to the Luhansk Regional CVU investigation, the shooting of apartment blocks and the building of a school-orphanage was carried out deliberately by Cossacks under the command of Pavel Dremov.  This, they allege, was directly aimed at destroying civilian targets in order to then, with the help of the Russian media, claim that it was the Ukrainian army who had targeted civilians.  The plan was especially dangerous since civilians were to be killed and civilian targets destroyed for political ends.

The conclusion that it was the Cossacks in control of Severodonetsk who carried out the shooting on July 1 is based on the following evidence published in the media.

As a result of the shooting, a man near a block in Youth Residential Complex. [YRC] received shrapnel wounds, and some flats in the blocks at YRC 7, and at No. 21 Lomonosov St were destroyed.  A school-orphanage [internat] and a garage near No. 6 Lomonosov St sustained damage, as well as several cars.  Severodonetsk bloggers have tried to plot out the hits and the assumed direction of the shooting here: http://svsever.lg.ua/wp-content/uploads/2014/07/karta.jpg

At around 11 a.m. Ukrainian soldiers opened fire on a militant checkpoint at the exit from Severodonetsk going towards Starobelsk (the Shedrishchevo turning) which caused a forest fire.

The events were presented from the point of view of the militants’ ‘South-East Army’ on the Russian channel Anna-News.

A video posted on the Internet makes it clear that the gap between the shots and their reverberation was a matter of seconds, indicating that the shooting was not far off, within one or two kilometres.

Another video of the explosion near No. 6 Lomonosov St proves that the shooting was from a mortar cannon.  The explosion occurred in the courtyard of a three-storey building located from the shooting. It is also clear from the video that this was a small-calibre mortar. Probably 82 mm.  Other sources also confirm that this was mortar fire and speak of shrapnel having been found on the ground.

Facts proving that the residential homes in Severodonetsk did not come under fire from the Ukrainian army.

The army positions are 14 kilometres from Severodonetsk in the village of Varvarivka and a mortar attack from that distance is impossible. The military are not making any forays into territory controlled by the militants to carry out shooting.  They also don’t have small –calibre mortar fire.

It would be impossible to hit the southern side of the block at No. 7 URC “Mriya” from the army’s position at Varvarivka.  It would also be impossible for a missile to have fallen in the courtyard of No. 6 on Lomonosov St – missiles don’t fall at such a steep trajectory.

“In our opinion the shooting was from mortar with 82 mm calibre from a distance of around 1 kilometre from the residential complex Shedryshchevo. There were no Ukrainian military there and couldn’t have been since the area is controlled by militants led by Pavel Dremov. The residential blocks and school-orphanage were deliberately fired at.  Moreover several minutes after the shooting Cossacks in soldiers’ hats (with one seen on a resident’s photo looking very much like an Ossetian) appeared together with Russian journalists. The Cossacks removed the shrapnel casing from the scene of the event, while the Russian media proceeded to record for the world the ‘crimes of the Ukrainian army’. “

The report by Aleksei Svyetikov can be found in Russian here