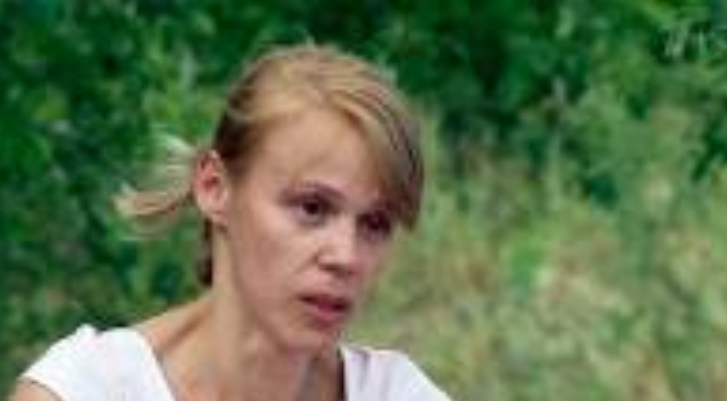 Russian TV’s latest propaganda stunt on the state-controlled Pyervy Kanal [First Channel] with its alleged witness account of the three-year-old son of a militant being crucified went too far.  The calls heard for measures against the broadcaster are warranted, the revulsion shared, however the chances of anything changing remote since a relentless barrage of such lies is achieving an overtly aggressive and lethal aim.

Photos have been posted on social networks showing the supposed ‘witness’ identified as a refugee and mother of four Halyna Pyshnyak photographed with an armed militant in full fighting gear.  Her real name is reported to be Astapenko.  Such discrepancies give even less credibility to her story which was in no way queried or subjected to any checks by the Pyervy Kanal report.  Not even the most basic checks,  which would have established that there is no Lenin square in the centre of Slovyansk,  where the execution was supposed to have taken place.   A Novaya Gazeta journalist has found nobody in Slovyansk to corroborate Pysshnyak’s claims.

In short, the story seems sure to be added to the already considerable number of fakes and distortions in the Russian media listed here.  Pyervy Kanal has been up with the other main Russian channels in using footage from other countries, other wars when supposedly demonstrating Ukrainian atrocities.  It was one of the channels caught out using the same man, but entirely different personae, for ‘witness stories’ from Donbas and on March 2 it claimed mass exodus of Ukrainians to Russia, but showed a border crossing between Ukraine and Poland.

The list of fakes, gaffes etc. may seem comical but this would be to ignore their very real danger.  Russian opposition politician Boris Nemtsov spelled it out clearly.  Told that Ukrainian ‘military executors’ have crucified a three-year-old and driven his mother, bound to a tank and blood dripping from her wounds, around the city, most people’s indignation will unfortunately not be directed at the manipulative TV channel.  Instead they will want revenge, to fight monsters who “could do such a thing”.  This is, after all, in keeping with the standard line taken by Pyervy Kanal and the viewer will not hear anything else by switching channels. TV Dozhd which could provide an antidote to such toxic lies is now only available to the small percentage of viewers with the right cable TV packages.

Disgust over the ‘crucifixion’ claims and the ease with which they can be debunked will probably mean that the ‘story’ is not picked up by other channels.  This is unfortunately not true of Russian media coverage of the terrible fire in Odessa on May 2.   No mention is ever made in such reports, now widely circulated in other languages, of the attack by armed young men on a peaceful march in support of Ukrainian unity in the centre of Odessa, nor of the clear evidence and video footage showing pro-Ukrainian protesters desperately trying to save people stuck in the Trade Union House building on fire.  Reports such as that issued by the United Nations Human Rights Commissioner show a complex picture with many on both sides responsible for actions which resulted in a terrible loss of life.  The Russian media has opted for unsubstantiated claims that people were torched to death, that those who managed to escape the fire were then murdered by pro-Ukrainian activists, etc.

The aim and the effect of such propaganda can be seen in the frequent mention of Odessa by militants who have come to fight in eastern Ukraine.  One 24-year-old Armenian, Artur Gasparyan gave an interview to Radio Svoboda explaining how he and others were trained and brought to Ukraine to fight for the Kremlin-backed militants of the self-proclaimed Donetsk People’s Republic [DPR].  In the interview entitled “The DPR is a fiction – decisions are taken by others”, he specifically mentions the events in Odessa prompting him and others in Russia to come to Ukraine to fight.  Unlike others killed in fighting, Gasparyan has had time to understand that they were manipulated, and to want out.

The close coordination between Kremlin policy and Russian media coverage leaves no space for doubt about the war role assigned the latter, with inevitable lethal consequences.