The Russian court order for Ukrainian pilot Nadiya Savchenko’s arrest refers to the Donbas region of Ukraine as the Donetsk and Luhansk People’s Republics.  This is only one of the staggering demonstrations of contempt for domestic and international law in the case involving the abduction and ‘trial’ of a Ukrainian officer.

The self-proclaimed ‘Donetsk People’s Republic’ covers the Donetsk oblast, including those parts still under the control of Kremlin-backed militants.  It was over those parts that militants informed the Russian media that they had shot down a Ukrainian military plane on Thursday July 17.  The video footage which in fact showed Malaysian Airline MH17 on fire has since been removed from Russian media sites and social networks, together with the claims that they had warned people not to fly over ‘their territory’. These same militants are presently obstructing recovery of the bodies of the 298 victims of the MH17 disaster and probably trying to destroy evidence.

There is no legally recognized “territory of the Donetsk and Luhansk People’s Republics’ and the fact that a Russian court should seriously use these terms in a detention order is gravely worrying.  The documents were revealed by Mark Feygin, Savchenko’s main defence lawyer.

He has also told Ekho Moskvy that there is no documentation for Savchenko’s entry into Russia or her detention.  It is known, Feygin says, that she was handed from the Luhansk militants to the Russian law enforcement bodies in the Voronezhn region of Russia.  This was illegal and falls under Article 126 of the criminal code (abduction).  There are 300 pages of various documents, but none indicates any way in which Savchenko could have legally appeared in Russia.

There is nothing to substantiate the claim from the Russian Investigative Committee that she entered Russia voluntarily. This is crucial since Savchenko herself has said that she was taken across the border by militants against her will, in handcuffs and with a bag over her head.

Feygin says that she was brought to Voronezh sometime between 20 and 30 June and place in the Euro Hotel, guarded by 2 unidentified individuals.

Prior to that she was held as a prisoner of war on territory controlled by the Luhansk militants (from the self-proclaimed ‘Luhansk People’s Republic’].

She had been in charge of an auxiliary division and was responsible for moving the wounded and killed.  The territory was near that where journalist Igor Kornelyuk and cameraman Anton Voloshin were caught by mortar fire and killed on June 17.  It is still unclear who was behind that shelling.

What is entirely clear is that the Russian investigator had no right to himself go to the Luhansk oblast and carry out investigative work.  For this there are agreements between the two countries.  No such assistance from his Ukrainian counterparts was sought.

Asked if there was any explanation as to how she had ended up specifically in Voronezh, Feygin said that there was only one. The law enforcement officers had received an order from higher up, in the final assessment from the Kremlin to find somebody to pin the killing of the journalist and cameraman on.

Feygin says that at present they are lodging an appeal, as well as a complaint to the Investigative Committee demanding that a criminal investigation be initiated over abduction. After that they will send an application to the European Court of Human Rights.  They are considering other options as well, including appeals to international organizations in connection with Russia’s breach of its international obligations.

Nadiya Savchenko has been remanded in custody until August 30.  Russia is claiming that she crossed the border pretending to be a refugee and was there found to be a person suspected of involvement in the killing of two Russian journalists on June 17.

This has now been refuted by Savchenko herself, but was already made totally absurd by the appearance of a video on June 20 which showed the officer captured and being interrogated by the militants. More details here   Russia’s investigators have thus shown themselves willing to closely collaborate with militants known to be holding civilians hostage, to have committed murders and numerous other crimes.  The Russian courts have proven disturbingly ready to follow that same lawless path. 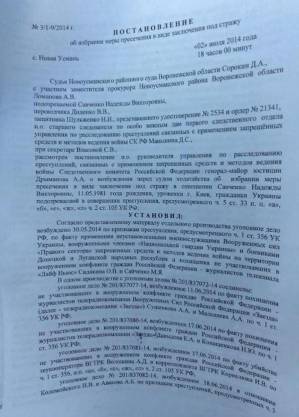