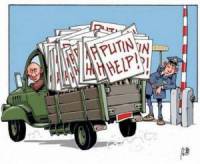 The head of Russia’s Investigative Committee [IC] has promised that Russia will come and get all of those the IC suspects of crimes committed against Russians in Ukraine.  Alexander Bastrykin not only warns that Russia will be willing to abduct people from Ukraine, but suggests that it will be following other countries’ example in doing so. And exercising “the right history gives us to carry out an investigation.”

In short, Interpol be warned:   we’ll get our suspects with or without you.  This brash message coincides with news that Dmitriy [Dmytro] Yarosh, head of the Ukrainian nationalist party Right Sector, has been placed on Interpol’s wanted list.  Russia is seeking to prosecute him for “1) Public incitement to terrorist activities involving the use of mass media; 2) Public incitement to extremist activities involving the use of mass media”.

The criminal investigation dates back to March 3 when the IC stated that Yarosh is suspected of “publicly calling anti-Russian forces to extremist action and terror on Russian territory”.   This came after the Russian pro-Kremlin TV channel LifeNews claimed on March 1 that Yarosh had made an appeal for help to the Chechen militant leader Doku Umarov  This claim was rejected the following day by the Right Sector press secretary Artem Skoropadsky who explained that a social network VKontakte account had been hacked, and that the fake had appeared during this period.

The denial, coming so soon after the allegations, seems credible if only because it renders the appeal senseless.  Even were the claim to be substantiated, the charges would probably be deemed grounds enough to prompt any country to agree to extradite Yarosh to Russia.

It should first be noted that Bastrykin’s use of the future sense was less than honest, since Russian investigators have already played a direct role in the abduction of one Ukrainian national.  Nadya Savchenko, a helicoptor pilot, was taken prisoner by Kremlin-backed militants in Ukraine, but is now facing prosecution in Russia.  The Russian investigators’ explanation for how Savchenko appeared in Russian detention lacks any credibility and has been refuted by the Ukrainian officer herself.

Bastrykin, who studied with Putin, and has spent periods as a professor of law, told members of the Investigative Committee that the Russian law enforcement bodies could resort to illicit measures to abduct Ukraine’s interior minister, Arsen Avakov, the governor of Dnipropetrovsk Igor Kolomoisky and Yarosh and bring them to Russia for investigation and trial.    Fontanka.ru reports Bastrykin as considering it  legitimate to bring people by force whom Russia suspects of using prohibited methods of war; of making public calls to terrorism; and of killing Russian journalists.

Bastrykin created a special department for investigating alleged crimes in Ukraine back in March with dozens of investigators helped by units from all regions where residents of Ukraine are arriving.

“The department will function until all Ukrainian soldiers and nationalists committing crimes against peaceful citizens face criminal prosecution. The fascists in 1941 didn’t think that it would end that way.  It ended very badly. History gives us the right to carry out criminal investigations. There will soon be new arrests”, Bastrykin promised.  He suggested that in the near future “additional legislative mechanisms enabling us to effectively detain foreign nationals hiding from Russian justice on the territory of another country will need to be drawn up”.

Bastrykin mentioned various changes needed to the criminal code, etc., then claimed that in all this “we need to follow the example of American and European colleagues and create a mechanism for working in such situations”.

Fontanka.ru spoke with Alexander Afanasyev, a lawyer who studied together with Bastrykin and Putin. He supports the idea of illicit operations to apprehend foreign nationals and bring them to Russia.

“Let our parachutists catch Yarosh and Turchynov [Oleksandr Turchynov, parliamentary speaker and for three months acting president – HC]  We must protect our citizens.  After all the Americans flew to Panama, brought the president to Florida, tried him and no problem”.  Yes, the special units are outside the law for foreign countries, but who cares?

“If we give up Novorossiya, the Crimea will be next. The Israelis in 1960 abducted Nazi war criminal Eichmann”.

Mention of Adolf Eichmann who played a direct role in the mass deportation and killing of Jews in the Holocaust as justification for illicit – and possibly wholesale - abductions is thoroughly offensive.  Unfortunately, there are other examples where Israel in particular, but not only, have simply abducted people they wished to prosecute, and Russia will certainly use this for what it’s worth in defending their right to such activities.

Fontanka.ru notes that Ukraine’s authorities have also taken to this idea.  It quotes Anton Herashchenko, spokesperson for Ukraine’s interior ministry as saying that Ukraine also needs to ‘take Israel’s example” and create such special divisions.

It is worth noting that Russia refused to extradite Alexei Lugovoi, a former Security Service [FSB] officer whom the British wish to question over the 2006 murder of Alexander Litvinenko who was poisoned with radioactive polonium.  Not only was no attempt made to properly investigate the allegations against him in Russia, but he was soon afterwards elected to the State Duma and remains an MP now.

It is just possible that the words above from both Russian and Ukrainian officials can be viewed as rhetoric and not taken seriously.  This is more difficult in Russia’s case for two reasons.  Ukrainian officials may hanker after such powers, but are unlikely to have the means to gain them.  Russia, on the contrary, has all the resources it needs to implement a policy of this nature. It is, in fact, doing so with its detention of Savchenko, as well as in the arrests and detention in Moscow of Crimean film director Oleg Sentsov and three other four Ukrainian nationals from the Crimea over an alleged ‘Right Sector terrorist plot”.

These two cases already give grounds for concern.  So too does the constant barrage of allegations coming from both the Russian foreign ministry and Russian media, some of which are mentioned as grounds for prosecution – and presumably, also for abducting the suspects.  These include the accusations that Ukraine’s army are using phosphorous bombs.  Russian Foreign Minister Sergei Lavrov’s demand that the UN consider the ‘evidence’ for this coincided with the use by Russia’s TV Zvezda of video footage supposed to be phosphorous bombs over the village of Semenivka near Slovyansk.  The footage in fact showed the bombing of Fallujah [Iraq] in 2004.   An enormous number of  other fakes have been exposed, yet Russia continues presenting the same claims.

The prospects if Russia exercising its supposed ‘history-given right’ to chase and catch people it suspects of ‘crimes’ in Ukraine are truly daunting.  Western countries who have seen the allegations made since the shooting down by Kremlin-backed militants of MH17 and the relentless anti-US rhetoric over recent months might like to consider the implications for their own citizens as well if this new policy were to be followed.