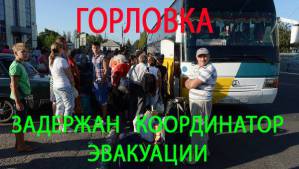 UPDATE:  On Wednesday evening Donbas SOS reported that Konstantin Piskun had been released.  No further details are available

Konstantin Piskun who is coordinating the evacuation of people from Horlivka in the Donetsk oblast was seized on Wednesday at around 11.00 by militants from the self-proclaimed Donetsk People’s Republic.  Piskun was helping women with children and elderly Horlivka residents escape the zone of military conflict, and coordinating departure of buses.

He was seized by the militants at the bus station while helping people on to the bus.

Piskun is not a political activist.  He is a member of a local church and committed to helping people.

His abduction could put an end to vital efforts to evacuate people.  Two thousand people have already been helped to leave Horlivka.  According to Pastor Sergei Kosyak, there are thousands wishing to leave.