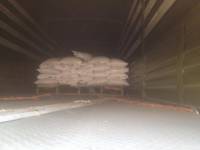 The contents of one of the Russian trucks purportedly carrying humanitarian aid (photo: Courtney Weaver)

Since writing the words below it has become clear that very many of the trucks are virtually empty arousing the suspicion either that something other than aid needed to be unloaded before the check, or that the whole ‘humanitarian convoy’ performance was aimed at distracting attention from other movement, quite possibly of Russian military equipment, across the border.

First journalist reports suggest that a number of the Russian military trucks in the ‘humanitarian convoy’ have little in them at all.  Timur Olevsky from TV Dozhd says that he has been able to see the inside of several of the KAMAZ trucks specially paint white for this ‘humanitarian’ exercise.  What was immediately noticeable, he says, is that those he saw, while indeed, containing buckwheat, water, etc., were less than a third full.  This is confirmed by tweets from FT journalist Courtney Weaver who writes that a lot of them are mostly empty.

If the trucks were always a third or less full, and 280 were first painted white and blessed by an Orthodox priest as a propaganda exercise, its success must be seriously questioned.  That, however, cannot be known since despite entirely false claims from the Kremlin and Russian Foreign Ministry, the International Red Cross were never shown the paperwork and were not able to check the contents.

The 280 trucks were supposed to arrive at the border crossing in Kharkiv oblast two days ago in order to be checked and transferred to IRC vehicles, under the latter’s supervision.  Moscow refused to allow this, and the trucks abruptly changed direction and headed for the Luhansk oblast which is under Kremlin-backed militant control.

Had they crossed that border, this would have been an overt act of aggression.

They did not, stopping instead some 20 kilometres from the border, however western journalists witnessed a column of Russian military vehicles, including armed personnel carriers, crossing the same border.  Reports of at least 23 such vehicles crossing on Thursday night were immediately posted by both Shaun Walker from the Guardian and Roman Oliphant from the Daily Telegraph.

This is also Russian aggression.  Unconcealed at that.  The vehicles did not even switch off their headlights, and crossed in an area so close to the 280 trucks that Russian military personnel would have been well-aware that the movement would be noticed and recorded.

Earlier on Thursday, Jeremy Bender was reporting for the Business Insider that the convoy “of unmarked white trucks to Ukraine, and the supposed humanitarian mission is now being accompanied by heavy offensive Russian military equipment.”

The Russian convoy has raised a number of red flags, even aside from this heavy contingent of guns and armor. The convoy has failed to abide by conditions put in place by both Ukraine and the International Committee of the Red Cross (ICRC) — the convoy is traveling under the ICRC flag, yet the organization has not been able to verify the contents of the trucks. “

Last weekend the US, UK and probably other countries made it unequivocally clear to Russia that any attempt to force the so-called ‘humanitarian convoy’ into Ukraine without Ukraine’s consent would be treated as Russian invasion.

While the ‘humanitarian’ load may have remained on Russian territory, heavy military technology did not. 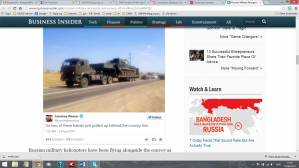