Russian NGO has list of 400 killed or wounded Russian soldiersIf Russia is not at war, then who is in those freshly-dug graves?Macabre Convoy: Cargo 200 from Ukraine to RussiaInvasion by any other nameHalf-empty or half-emptied?Poland knows about Russian ‘humanitarian convoys’. It didn’t let one in.Stand up to Putin: buy Polish apples!No Sanctions Game Changer?Will the West sleep through this final wake-up call?Russian LifeNews inadvertently told the truth about downed Malaysian airlineMilitants accused of deliberately shooting at Severodonetsk residential areaSent to be shotThe EU’s Opaque Dealings with UkraineWhose anti-Semitic and Homophobic Choice?What should they talk about, Mr Putin?The Peace that chokes RussiaEU’s Clear and Consistent Capitulation?Russian tanks and Ukrainian orphans in Moscow’s unabated offensiveCheck your sources, Mr LavrovRussian media claims ‘genocide’ in Semenivka [Donbas]
• Topics / Politics and human rights 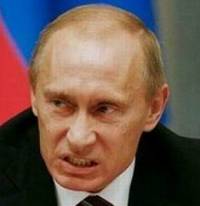 Why should Russia be in no doubt of ‘serious consequences’ when even with evidence pouring in of direct involvement by Russian forces using Russian tanks and sophisticated arms on Ukrainian territory, western leaders largely continued to rehash old warnings?

With speaker after speaker at an emergency Security Council session on Aug 28 spelling out Russia’s aggression in Ukraine while announcing no real measures to stop it, Russian President Vladimir Putin decided to add his words of ‘concern’ about senseless deaths.

An ‘Appeal to the insurgents of Novorossiya’ appeared on his website at 1 a.m. on Aug 29.   In it, he states that the “insurgents have had serious success in stopping Kyiv’s military operation which is posing a deadly threat to the population of Donbas and has already led to huge numbers of victims among civilians.  As the result of the actions of the insurgents a large number of Ukrainian soldiers who are taking part in the military operation through no fault of their own, but obeying orders, have ended up surrounded”.   He calls on “the insurgents” to create a humanitarian corridor for Ukrainian soldiers surrounded, and allow them to “be reunited with their families, return them to their mothers, wives and children”.

“Russia on its part is ready and will provide humanitarian assistance to the population of Donbas suffering a humanitarian catastrophe.” He “again” calls on the Ukrainian authorities to immediately cease military action and “sit down at the negotiating table with representatives of Donbas, resolve all the problems that have built up solely through peaceful means”.

His ‘appeal’ with photos of him looking suitably concerned were immediately broadcast on all Russian television channels, and indeed the words were presumably mainly for their benefit.  In his version, only the Ukrainian military are the aggressors and causing suffering, and now the merciful Russians are asking the ‘insurgents’ to show pity on blameless soldiers obeying orders and their families.

Before considering all that Putin chose to ignore, it is worth considering why he believes such a verbal performance to be sufficient.  There were certainly hard-hitting statements at the UN session, with the US Ambassador Samantha Powers as incisively truthful as ever. Other than that countries’ leaders and UN representatives steered well clear of any words that might suggest immediate – or any – action.

According to the BBC, “French President Francois Hollande said it would be "intolerable" if Russian troops were in Ukraine, and demanded Russia stop sending aid to the rebels.”

Why the conditional “it would be” unless he wants to deny not only NATO reports, but the ample video footage he can view himself?”

“British Prime Minister David Cameron warned that if Russia failed to find a political solution, "she should be in no doubt that there will be further consequences"

Why should Russia be in no doubt of an adequate response when even on a day when there was incontrovertible evidence of direct Russian military involvement, the reaction is so pitiful?

One can only hope that the response will swiftly prove to contain more than simply expressions of ever greater ‘concern’.  It is galling that at present Putin is making more effort to deceive the Russian people, than he is the West.

He may well fail.  Not because protests cannot, at present, be repressed.  Great credit to those few individuals like Dmitry Monakhov who came out onto Manezh Square in Moscow to assert that Russia’s aggression was illegal and have paid with terms of imprisonment.  There were only isolated voices.

This may be changing as Russians begin to understand that their own soldiers, including conscripts, are being sent to fight Russia’s undeclared war.

NATO spoke of well over a thousand Russian forces on Ukrainian territory, with the combat solders in question armed with highly sophisticated technology. According to Valentina Melnikova, head of the Union of Committees of Soldiers’ Mothers, as many as 15 thousand Russian soldiers may now be fighting in Ukraine.  She stresses that it is hard to say how many are officially serving at the moment.  Others may have severed contracts or be on unpaid leave.  If the latter, then somebody is paying them to take time off to fight this Kremlin-supported and armed war.

It is quite clear, however, that there are also many currently serving soldiers in Ukraine.  Some have been killed with quite grotesque efforts made to keep the cause and place of death secret as well as thuggish methods applied against journalists trying to find out the truth.  This, as well as the fact that the mothers of the soldiers captured by the Ukrainian military knew nothing about their sons fighting in Ukraine, demonstrates the full cynicism of Putin’s ‘appeal’ and professed concern for anxious family members.

Putin’s claim that Ukrainian soldiers are there ‘through no fault of their own’ is especially mendacious considering that among the Russians sent to fight in Ukraine, there appear to be conscripts, as well as contracted soldiers who have been given no choice.  Melnikova reports that one young man sent his mother a text message saying that Colonel Medinsky had gathered soldiers together and told them to sign a contract to go to Luhansk.  The colonel told them that if they didn’t sign, he would sign for them.

After talking to the parents of conscripts from a Ryazan paratrooper division, Melnikova believes that as many as 250 conscripts may have been forced to sign contracts to be sent to Ukraine next week.

Such information has also been received by Sergei Krivenko from the Russian Presidential Human Rights Council. It is unclear whether they have specific grounds for believing that the supposed ‘exercises’ in the Rostov oblast are a cover, and their sons are being sent to Ukraine, or have simply understood that the authorities cannot be trusted.   Both Krivenko and another member of the Council Ella Polyakova have received figures suggesting that one hundred Russian soldiers were killed on Aug 13, and a further 300 injured.

It can’t be said that Russia’s leaders have no wish for the truth to be told.  On Aug 28, Prime Minister Dmitry Medvedev stated that Russia “must establish the exact number of deaths in the First World War”.

Medvedev’s priority one century on was reported by TV Dozhd which has begun its own civic investigation “Our Soldiers” to find out what is going on with soldiers being sent to Ukraine.

Ella Polyakova  told Reuters that “when masses of people, under commanders’ orders, on tanks, APCs and with the use of heavy weapons, (are) on the territory of another country, cross the border, I consider this an invasion.”

Putin clearly believes that not mentioning the nasty word and using all forms of coercion and deceit to try to hide the truth will work.  Death and human suffering will prove him wrong.  How much more blood will be spilt and lives destroyed depends now on when western countries finally understand they must act