The West’s Clear Message to Russia: We’ll go on blustering 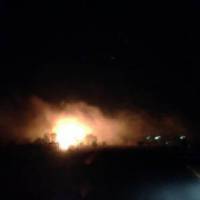 Three days after President Barack Obama’s visit to Tallinn [Estonia] was billed as sending a clear message to Russia and its neighbouring states, the Russian authorities appear to have provided a message of their own.

An Estonian counter-intelligence officer, Eston Kohver, has been remanded in custody at the Lefortovo prison in Moscow.  According to Estonian officials, he was abducted at gunpoint on Estonian territory near the Luhamaa border checkpoint on Friday morning.

Russia’s FSB [security service] claims that it stopped a counter-intelligence operation by Kohver in the border zone on the territory of the Pskov oblast. He is 'suspected' of spying, illegal possession of a gun and illegally crossing the border.

“A Taurus pistol with ammunition; 5 thousand EUR; special technology for carrying out illicit recordings; as well as material of an intelligence nature were taken from the offender”.

Estonia’s foreign minister had earlier summoned the Russian ambassador to express protest over what Estonia categorically states was an abduction.

The message  given by Obama to Russia’s neighbours was supposed to be one of ‘reassurance’, and to Russia – that its actions were ‘unacceptable’. The message from Russia appears to be that it can and will do whatever it pleases.

The Kremlin is showing very little concern over all the stern messages from the West, while its systematic and largely unimpeded invasion of Ukraine cannot fail to unnerve the Baltic republics and Poland.

The NATO conference in Wales made all the right noises, as did Obama and German Chancellor Angela Merkel.  There are no second-class countries in NATO, they asserted, and article 5 means that an attack on one country is an attack on NATO itself and will receive immediate response.

There was even a Joint statement of the NATO-Ukraine Commission which declared unequivocally that “Despite Russia’s denials, Russian armed forces are engaged in direct military operations in Ukraine; Russia continues to supply weapons to militants in eastern Ukraine; and it maintains thousands of combat-ready troops on its border with Ukraine. “

Russia was repeatedly warned of the gravest consequences if it invaded Ukraine.  A large number of Russian troops, together with tanks and sophisticated equipment are now in Ukraine.  It also appears from reports that the ceasefire is being used to strengthen Russian positions in Luhansk.

While the latter, albeit repeated by different sources, cannot yet be confirmed, the evidence over the last week and a half is already overwhelming.  This makes the approach taken by such major information agencies as the BBC which insist on stating only that the Ukrainian authorities claim that Russian forces are in Ukraine baffling.

The statement from NATO must have been agreed by its member states, and the accusations against Russian contained in it have been reiterated by the US State Department, and a number of countries’ representatives at the United Nations.

Perhaps the sanctions, if they really are imposed on Monday, will have a long-term effect on Russia’s economy. They will not help Ukraine.

The ceasefire announced on Friday – with its ‘special status’ for Donbas; early local elections and total amnesty for all militants – would, if it worked, give the Kremlin an opportunity to maintain control over Donbas while leaving Ukraine to deal with the massive destruction. Since any offers of help or loans from the West have been tiny in comparison to the task, this would still further weaken the new Ukrainian government.

In fact, it seems likely that Moscow – has understood that it can take more and will not stop with the area already under ‘militant’ control.

Late Saturday evening there were reports of an artillery attack on Mariupol, the port city whose residents have come out in their thousands in support of Ukrainian unity and have been digging trenches and training in the hope of defending themselves against attack.   Informator.lg.ua reported that heavy shelling of the city began at around midnight.  It noted that the storming of the city had been expected on Aug 5 when the militants’ ultimaturm that the Ukrainian forces leave the city expired. A column of 20 Russian tanks moved towards the city, however the plans were thwarted, with heavy fighting taking place on the outskirts of the city. The Ukrainian forces, the publication reports, had begun a counter-offensive and liberated Shirokoino, when the bilateral ceasefire was announced.  It was widely viewed as an opportunity for the Russian forces believed to be waging the offensive to regroup and rearm.

Without serious aid from western countries Ukraine is clearly unable to fight Russia alone, while insistence on a ‘political solution’ has yet again played into Russian President Vladimir Putin’s hands.

Whether the official truce is to be used in order to try to seize Mariupol and advance further or to create another frozen conflict zone while crippling Ukraine economically is now entirely up to the Kremlin.