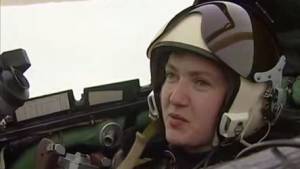 Russia does not consider a Ukrainian officer taken prisoner by Kremlin-backed militants and abducted to Russia to be part of the exchange of prisoners agreed at the Minsk negotiations.  Asked about the possible release of Nadiya Savchenko and Oleg Sentsov, Russian foreign ministry spokesperson Alexander Lukashevich claimed to see no link between their cases and the Minsk protocol which spoke of prisoners of war.

He also said that he had been asked about these cases by Thorbjørn Jagland, Secretary General of the Council of Europe.  “We told him openly that in connection with a whole range of actions serious charges had been laid against them which will be considered in accordance with the norms of our legislation “.  He acknowledged that there was a “humanitarian aspect to this problem” and promised to check details and answer more definitely.

Let’s hope he does so soon since there is considerably more involved than a “humanitarian aspect”.

In his briefing on Sept 11 Lukashevich denied that Russia was a party to the conflict.  Even if that were the case, Nadiya Savchenko’s release would fall within the scopeof the Minsk agreement as she was taken prisoner by militants from the so-called Luhansk people’s republic.

As reported, Savchenko was captured on June 17 or 18.  Two days later a video appeared of her being interrogated by the militants. She demonstrated courage during the interrogation and refused to provide the information the militants demanded.

Nadiya Savchenko has been placed against her will and with no justification for ‘psychiatric examination’ in the notorious Serbski Institute.

Oleg Sentsov and three other opponents of Russian occupation of Crimea

Mention has only been made of renowned Crimean film director Oleg Sentsov, however Russia’s FSB arrested four men in the Crimea in May 2014.   Oleg Sentsov, Oleksandr Kolchenko, Gennady Afanasyev and Oleksy Chirny were actively opposed to Russia’s annexation of the Crimea.  They were arrested at different times in May and after interrogation allegedly with the use of torture were taken to Moscow where they are facing positively far-fetched ‘terrorist’ charges.  Chirny has also been subjected to a Serbsky Institute ‘examination’ and the NGO Open Dialogue has expressed concern that he could be the victim of punitive psychiatry.

This final law student from Lviv has been in custody in the Kursk region of Russia since May and is now facing charges which bear no scrutiny. More details at: Russia’s Geopolitical Prisoners.