First reports on Pro-Kremlin TV of Russian soldiers killed in UkraineEntire Pskov paratrooper regiment killed in Ukraine?More Russian conscripts forced to fight in UkraineAttacked for asking why Russian paratroopers died fighting in UkraineThe Russian Invasion and Deaths Putin didn’t mentionRussian NGO has list of 400 killed or wounded Russian soldiersIf Russia is not at war, then who is in those freshly-dug graves?Macabre Convoy: Cargo 200 from Ukraine to RussiaInvasion by any other nameHalf-empty or half-emptied?Poland knows about Russian ‘humanitarian convoys’. It didn’t let one in.Stand up to Putin: buy Polish apples!No Sanctions Game Changer?Will the West sleep through this final wake-up call?Russian LifeNews inadvertently told the truth about downed Malaysian airlineMilitants accused of deliberately shooting at Severodonetsk residential areaSent to be shotThe EU’s Opaque Dealings with UkraineWhose anti-Semitic and Homophobic Choice?What should they talk about, Mr Putin?
• Topics / News from the CIS countries 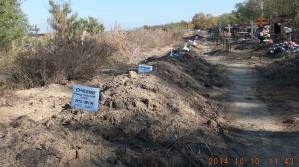 Andrei Palych has posted photos of graves marked only NM or NW [unidentified man / woman] in the Severnoye [Northern] Cemetery in Rostov on the Don.  He says that in May last year his father was buried there, opposite a residential complex built by the defence ministry for soldiers.  Since the last time he was there, three rows of freshly dug graves have appeared.

If Russia is not waging war with Ukraine, then why are so many Russian soldiers dying?  If they died, as claimed, on ‘military exercises’, why are their families and NGOs still unable to find out any details?  And why have criminal investigations not been initiated?

Ella Polyakova, head of the NGO Soldiers Mothers of St Petersburg has lodged a formal request with the relevant department of Russia’s Investigative Committee for a check to be carried out of the death of servicemen from July to September 2014.  She gives the names of young men killed, as well as the places where they were (supposedly) serving. Her sources are, however, not the defence ministry or the men’s command, but information published by the Russian media.

In the letter they point out that the reports of soldiers’ deaths were published in media with State registration meaning that the authorities should themselves have carried out a check.

If the young men, presumably conscripts, died during training exercises, criminal investigations must be initiated against the officers who allowed this to happen.

The NGO warns that if the military investigators refuse to initiate such investigations, they will be forced to publish information about this in the same media which posted the reports of the men’s death.  This is in full compliance with Russia’s information legislation.

A copy of their letter has been sent to the Chief Military Prosecutor’s Office which is responsible for overseeing checks like that demanded.

Russia regularly loses cases at the European Court of Human Rights, including many where people in the north Caucuses disappear after being taken away by Russian federal forces.  In most such cases  the Court finds Russia guilty of violation of Article 2 [right to life] of the European Convention on two grounds:  the almost certain involvement of federal forces in people’s disappearances / deaths; and over the failure of the authorities to carry out a proper investigation. See, for example,  the case of Sultygov and others v. Russia.

Yelena Vasilyeva is the Russian founder of the group Cargo 200 from Ukraine to Russia which is trying to find out about Russian soldiers and conscripts killed in Donbas.  She told an UNIAN journalist that she gets letters from mothers who are desperate to find out how their sons were killed.  She says that people in Russia are beginning to understand that if somebody’s attacked in the press, that means they’re telling the truth.

“Ukrainians try to identify each person killed. The other side just puts people into one pit”, Vasilyeva comments bitterly.  Her group believes that as many as four thousand Russian soldiers have died in the conflict and is dismissive of the word ‘ceasefire’.

She says that soldiers are now refusing to go to Ukraine.  This, however, may not mean much since there have been many reports of young men told that if they didn’t sign the relevant documents, they’d be signed for them.  The pressure in other ways on them to agree is likely to be ferocious.

Asked why there isn’t more information available in Russia about these deaths, Vasiyeva points first of all to the total censorship in force in Russia, then to the fact that conscripts and contract soldiers are taken from poor or isolated areas where there’s no work otherwise.  (This does not, per se, cover conscripts however there are many ways, including almost certainly bribes, of avoiding military service, meaning that it is likely that more go from areas where such levers are not available – HC).  It therefore takes time for information about their deaths to reach their families.

People are beginning to ask questions.  If they’re told that their sons died on military training, of a heart attack or committed suicide, they obviously don’t believe it and approach people like the Cargo 200 group to help them get to the truth. Vasilyeva expects that more questions will be asked in October – November when young men doing military service should be arriving home.

It remains to be seen whether the St Petersburg Soldiers’ Mothers get any answer. Optimism is difficult given the overt attempts over recent months to conceal information, attacks on Lev Schlossberg, who first revealed the deaths of the Pskov paratrooper regiment and others, and the fact that the NGO itself was formally labelled a ‘foreign agent’ within days of first publicizing Russian deaths.  The figures and the allegations reported here, and on the media, may be inaccurate, but responsibility for that lies with the Russian authorities whose lies and subterfuge have destroyed any trust in official reports.