Crimean Tatar Mejlis will not register as a ‘civic organization’ 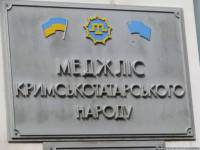 Deputy Head of the Mejlis, or representative-executive body of the Crimean Tatar People, Akhtem Chyyhoz has stated that the Mejlis will not be registering within the framework of Russia’s legislation on civic organizations and associations.

“The point is that they are suggesting that we register at the level of a civic organization which is unacceptable since the Mejlis of the Crimean Tatar People is an elected representative body. It is impossible to put it in the same category as civic organizations”

Chyyhoz was commenting on the remarks made by Remzi Ilyasov, once a member of the Mejlis and now deputy speaker of the Crimean parliament who claimed to see nothing wrong with the Mejlis registering as a civic organization, and said that this could be done by the end of the year.

“We are living now in such a state which has its rules, its demands and we must observe them”, Ilyasov said at a press conference.

Chyyhoz says that the authorities of occupied Crimea have been given proposals from the Mejlis regarding recognition and the form of dialogue with the representative body of the Crimean Tatar people.  There has so far been no response.

Sergei Aksyonov, the self-proclaimed prime minister of the Crimea recently stated that he did not plan to speak with the Mejlis until it was formally registered.

The Mejlis and its leaders came under pressure soon after Russian annexed the Crimea in March 2014, following the long-denied invasion by Russian forces.

First veteran Crimean Tatar leader, former Mejlis leader and Ukrainian MP Mustafa Dzhemiliev was banned from his homeland for 5 years, then the current head of the Mejlis Refat Chubarov received an identical ban.

The Mejlis called on Crimean Tatars and all concerned about the situation in the Crimea to boycott first the pseudo-referendum on March 16, then the ‘elections’ on September 14.  On Sept 17 the FSB [Russian security service] turned up with armed men and carried out a 12-hour-search of the Mejlis premises in Simferopol.  The following day, the Mejlis, the Krym Fund and the Mejlis’s newspaper Avdet were forcibly evicted.

These are the most overt, but by no means the only attempts made to undermine the authority of the Mejlis and / or crush it.