Death Sentence with a Show of Hands 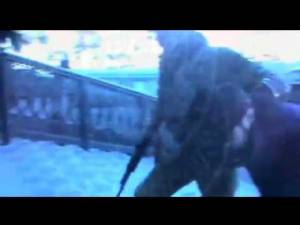 The full video clip of what the Kremlin-backed militants in the Luhansk oblast call a ‘court’ has been posted on the Internet.  In it two men are 'tried' and one sentenced to death, supposedly for attempted rape and group rape, with the ‘sentence’ being passed by the audience through a show of hands.

An initial video posted last night on the social network VKontakte and YouTube pages of top militant and leader of the Pryzrak Brigada Alexei Mozgovoy was much more scrappy, and showed only one man. If reaction was awaited before deciding whether to boast of this ‘people’s court’ or claim that the material was a fake, the militants have unfortunately chosen the former.

The ‘performance’ video has been released by Mozgovoy’s information service, and is an elaborate show with music chosen for dramatic effect.  Key words appear in black letters: Trial of Rapists. Alchevsk.  The audience is told that they have been invited in order that ‘on this land people’s justice finally reigns”.   “Every voice will be taken into account”.

The two men sit at a separate table with their heads forced down by the armed man standing over them.  One is then made to stand up while one of the militants explains the charge, based entirely on the testimony of one woman.

The ‘court-audience’ is informed that in the militants’ opinion, the crimes committed [sic] by these people deserve the death penalty.  The audience will all have the opportunity to express their views before the ‘verdict’ is put to the vote, with a simple majority sufficing to sentence to men to death.

In this ‘people’s court’, there is no defence, no cross examination of the alleged victims and any witnesses.

The audience is told that the men are guilty and deserve to be executed and are invited to ‘vote’.  A large number raise their hands.

This elaborate performance posted on the Internet is actually called a ‘trailer’, like those of films giving a taste of what is to come.  This presumably is the reason it was first posted on the eve of the illegal ‘elections’ which the self-proclaimed Donetsk and Luhansk people’s republics [DPR, LPR] are holding on Nov 2.

With two men treated as serious criminals from the outset, and accused of a violent crime, it is unfortunately likely that a significant percentage of viewers will actually approve of this supposed ‘justice’.

The performance may possibly raise the militants’ popularity among Ukrainians whose view of the courts is about as low as of the law enforcement bodies.  It is probably designed also to intimidate, with those viewed by the militants  as ‘criminals’ effectively given no chance to defend themselves.

In the middle of August 2014, the DPR introduced something that it called their ‘criminal code’ based on that of the Russian Federation. It included the death penalty for particularly grave crimes.  In a second resolution passed by the so-called DPR ‘Council of Minsters’ on Aug 17, military courts and a system of military justice were introduced.

At the time only “cases of looting and the use of violence” were mentioned, although the list of grave crimes committed by the Kremlin-supported militants is considerably longer  It includes the horrific torture and murder of Horlivka deputy Volodymyr Rybak, 19-year-old student Yury Popravko, 25-year-old student Yury Diakovsky, four members of a Slovyansk evangelical church, Lithuania’s honorary consult Mykola Zelenets and others. There have been harrowing tales of torture and ill-treatment from journalists, priests, and simply ordinary citizens whom the militants held hostage.

There is no information about how many people have been summarily shot, possibly for desertion.

Russia has stated that they will ‘recognize’ the pseudo elections which the militants are holding this weekend.  With this first ‘people’s court’ obviously produced to coincide with that event, this is an eloquent indicator of who their protégés are, and,  unfortunately, of what Ukrainians can expect under their rule.