Part of Mezhyhirya returned to the State 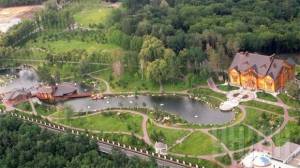 Almost 1.8 hectares of the former State residence and grounds at Mezhyhirya illegally privatized by Viktor Yanukovych has been restored to public ownership.  The relevant court order was issued on Oct 29 by the Vyshhorod District Court.

The application was lodged by the Prosecutor General’s Office which states that its check found flagrant infringements by the Vyshhorod  District Administration in appropriating and disposing of the land since the prerogative for this lies solely with the Cabinet of Ministers.

The land in question was used for serving the building and for the construction of other buildings, etc. in the Mezhyhirya estate.

Viktor Yanukovych abandoned Mezhyhirya late on Feb 21, 2014.  During the next few days ordinary Ukrainians visited the vast estate and saw the tasteless opulence which he had surrounded himself with.

Throughout the years of his presidency, Yanukovych allowed only a selected group of journalists to see a small part of the estate which he effectively privatized, via various corrupt dealings beginning in 2007.