Healthcare under the control of Kremlin-backed militants 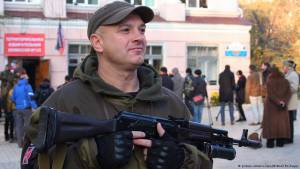 There are shortages of even the most basic medicines in Donetsk pharmacies and clinics, and doctors are being ‘paid’ partially through food parcels. Deutsche Welle’s Ukrainian Service looked into the situation with healthcare in the area under the control of the self-proclaimed Donetsk people’s republic.

After the main hospital – the Kalinin regional hospital – in the centre of Donetsk was seized by the Kremlin-backed militants, the hospital was effectively turned into a military hospital which now treats fighters of the so-called DPR for free.  The hospital was until recently the most well-equipped and modern in the oblast and one of the fighters in camouflage told DW that judging by what another ward patient had paid, his treatment would have cost around 15 thousand UAH.

Other Donetsk residents confirmed that you would normally pay for treatment. One woman said that the doctor had asked her to pay what she could for the operation.  On top of that, however, she needed to pay the nurse for soaps, etc, the office for stationery supplies.  None of this, however, has anything particularly to do with the current situation.

The DPR leaders claim that they will make medicine free for everybody.  These were the slogans because the pseudo-elections on Nov 2.  Some doctors told DW that they had received threats that they would be shot for providing paid services or bribes, even if these were in the form of a box of chocolates.

“Our department had a meeting with the new management of the “DPR health ministry’. They demanded that we hand in resignations and transfer to working for the DPR, and they warned us that any paid services would be prohibited” a doctor from one clinic in Donetsk said.  She adds that they received no answer to questions as to who would cover all costs and how the healthcare would be financed.

In the meantime, there is no clarity even as to how medicines can be financed. One Donetsk woman told DW that even the most basic items are not available, and it is the same situation in the hospital.  One surgeon, named only as Oleksandr, explained that the pharmacies cannot buy medication since the bank system is not working and nobody is going to try to bring cash across the checkpoints.

He adds that there is no centralized supply of medicine to hospitals, etc, in the area under militant control, and therefore in most hospitals there is little they can do to help patients.  The 45-year-old has left his work in the hospital, unable to cope with the stress from the lack of basic things.  He cites the example of a man being brought in at 2 a.m. with internal bleeding. He didn’t have painkillers, elementary safety devices, anaesthetics etc. “and they scream at you: do what you like but the man must live”.   The list of items he gives that were not available is indeed long, with even iodine and cottonwool not available.

In such conditions he says, you think only of how to feed your own family. They paid some kind of pittance with the rest in food parcels.  In fact, he says, money is also not needed since most of the shops are not working.

In fact, however, the situation is not so clearcut.  One person in charge of a part of a Donetsk clinic who did not want to give her name said that her hospital is still receiving Ukrainian state funding.  They are receiving full supplies of medication, according to the state programme, with Medicins sans Frontiers helping to get these through the checkpoints. She explained that the last time they had received medicines was a few days ago, and they were expecting another one.  She added that salaries are being paid albeit with delays. “All of that is being done by Ukraine. So the situation is not so very bad, the main thing is that the war ends”.