Journalist in captivity for 100 days 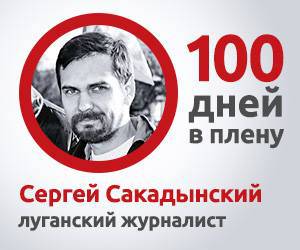 Luhansk journalist and chief editor of the Internet public Polityka 2.0, Serhiy Sakadynsky, held by the Kremlin-backed militants for 100 days, has been moved from a basement in Luhansk to Krasny Luch.

The battalion which is holding him prisoner is moving to Krasny Luch and taking its prisoners with them.

There were varying accounts of the disappearance of Serhiy Sakadynsky, who also heads the Luhansk Eastern Ukraine Centre.

It now appears that he and his wife, Mariya Havak were seized on Aug 2 at their dacha near Hostra Mohyla in the Luhansk oblast.  The couple arrived at the dacha to find that their car had gone.  This, it transpired, had been seized by the militants who in the process discovered what for them was ‘incriminating evidence’ against them.  These included a Ukrainian flag and supposedly some kind of documents proving that Sakadynsky is an ‘honorary activist of the Luhansk EuroMaidan’.

Mariya Havak was released on Oct 1.  She was able to see her husband that day.  He told her that the accusations from these documents which caused his capture were not proven true, yet he has still not been released.

Sakadynsky’s conflict with the Luhansk militants began on July 6 when they detained him and a colleague supposedly trying to photograph a ‘military object’.  The militants then appeared at his home, removing all electronic equipment except mobile phones.

Mariya Havak has appealed to the OSCE mission in the Luhansk oblast to help get her husband released.  They have said that they will do all they can, but give no guarantees, and she is asking colleagues to write about him in the hope that publicity can help.

Kharkiv journalist Roman Cheremsky from Ukrainsky Prostir has also been held hostage for almost three months.  He and rights activist Valery Makeyev were seized by the militants in August and apparently accused of ‘spying’.  Cheremsky is believed to be held in Luhansk.  [Makeyev is not mentioned in the Telekritika report, so may have been released].