In Donbas protests against militant rule – and hunger - mounting 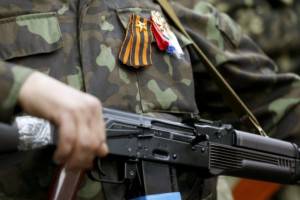 Kremlin-backed militants in cities under their control are proving unable to come up with salaries and pensions as they promised, and protests are spreading with people hungry and desperate.

Informator.lg.ua reports that in the Luhansk oblast city of Sverdlovsk public sector workers have received largely symbolic ‘pay’ from the self-proclaimed Luhansk people’s republic.  This follows protests in the city over the catastrophic socio-economic situation.

According to local residents, nurses and school workers received 130 UAH; doctors – 270.  This was the first ‘pay’ any had received since May since the city is under the control of ‘LPR’ and the local infrastructure responsible for paying public sector workers destroyed.  The amounts are doubtless better than nothing, but pitiful.

On Nov 17 there was a spontaneous protest action by city residents outside one of the command posts of the militants.  There were demands for wages, social payments and also the ‘social cards’ which the Kremlin-backed militants had promised.   Informator.lg.ua reports that the residents were not afraid of showing their anger.  Threats against the militants were heard, and the gate of their ‘command’ painted in blue and yellow, the colours of the Ukrainian flag.

The militants tried to scare the protesters away with machine gun fire, however the publication reports that people kept coming with over a thousand involved.

This is not the first time that the militants have used their machine guns to try to stifle protest.   The same publication reports that the previous day Denis Ponizovny, head of the militants in Chervonopartisansk [Sverdlovsk rajon] called armed militants with machine guns to ‘calm down’ a particularly angry speaker.  The woman – Iryna Bondarenko, works as a lift operator in a local mine and positively asked for her name to be remembered in case anything happened to her.  Ponizovny was clearly put out by her questions regarding the promised free canteens for those badly off in the city; about when the miners would be paid; and other questions about the situation in the city.  The armed militants tried to pull her off the stage, but, according to witnesses, were stopped by others present.

At the same protest it was stated that as of Nov 16, 64 people had died of starvation.

During the last week there have also been reports of protests in Makiyivka; Torez; Snizhne; and Yenakiyevo.  Local residents have long not received social benefits; pensions; medicine; and aid from the so-called humanitarian convoys.

In the meantime, the promises issued by the so-called Donetsk and Luhansk ‘people’s republics’ [DPR, LPR, respectively] are proving empty.  The Donetsk-based website OstroV reports that the DPR has told teachers working in schools and institutes under their control that they should not expect to be paid in the near future.  Most have not received their salaries for months now.

In Stakhanov the head of the militants Pavel Dremov is reported to have ‘apologized’ to local residents.  The video on YouTube has now been removed indicating that somebody felt it damaging, but there is no statement that it is a fake.  The video shows Dremov stating that “when I promised 500 UAH to each pensioner, I simply didn’t realize how many there were.”  He says that after discovering that there are 31 thousand pensions, they counted and came to a figure of 15 million which is an amount ‘they can’t imagine’.  GORDONUA.com adds that Dremov mentions that in the Leninsky district of Luhansk nobody has been given a single kopeck either and suggests drily that on this basis it looks like the Stakhanov militants will also not pay the money. 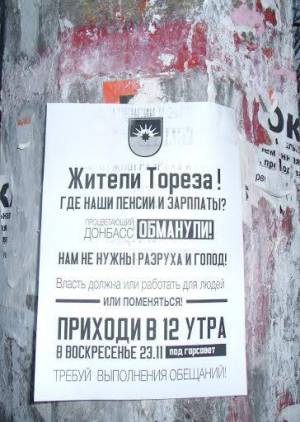 It is unfortunately next to impossible to verify all the reports.  It is likely, for example, that posters pasted around the cities under militant control were not produced by local people.  These called on the residents of each particular city to gather on Sunday, Nov 23 to demand salaries and pensions.  In the present climate of fear, local residents could easily have suspected provocation and stayed away.

The problems are, however, being accentuated, for differing reasons, by both Moscow and the Ukrainian authorities.  Despite having recently brought many thousand Russian military, together with tanks and heavy equipment into Ukraine, and having armed and manned the fighting since mid-April, the Kremlin is now endeavouring to present the Ukrainian government as monstrous for refusing to finance the militants’ ‘republics’.  As reported here, the government announced on Nov 7 – following the militants’ entirely illegal pseudo-elections – that it would no longer be paying any social benefits or pensions to people living in areas under the control of the militants.  Those due such benefits have until Dec 1 to register as living in areas under government control.  If they do not, the pensions, etc. will be allocated, but held for them.

While some of those in militant-controlled areas were previously conned by the promises the Kremlin-backed militants gave, others have been adamant from the outset that Donbas is Ukrainian.  With many simply unable to leave Donbas – the old or infirm, those staying to help others –  there are differing views about the government’s stand  (see: Donbas Ukrainians feel betrayed).

The Ukrainian government’s stand has certainly highlighted the issues – the total bankruptcy of the militants and their promises and the fact that Russian ‘aid’ is confined, aside from the unidentified loads of the so-called ‘humanitarian convoys’, to providing tanks, artillery and mercenaries.

What is very clear is that the situation is extremely serious and there are a huge number of people in desperate straits.