Another Arrest in Dubious ’May 3’ Case against Crimean Tatars 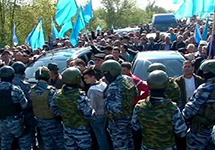 A fourth arrest on Nov 25 has heightened suspicion that Russia’s puppet regime in the Crimea is manufacturing its own Bolotnaya Square trials, like those in Russia, aimed at intimidating Crimean Tatars and silencing opposition.  Three Crimean Tatars have already been remanded in custody for two months over an alleged incident 6 months ago during the protest on May 3 when veteran Crimean Tatar leader Mustafa Dzhemiliev was prevented from entering his native Crimea.

The man arrested on Tuesday, Edem Ebulisov, was born in Tajikistan in 1970 and is  a father of three.  Little more is known at present and QHA reports its own source as saying that Ebulisov’s family have refused to speak with human rights groups and the media.

Crimean lawyer Emil Kurbedinov reported earlier in the day that the charges are again likely to be violence against a police officer with the investigators claiming that he used the wooden part of a flag to hit a police officer.

On Oct 24 Crimean Tatar activist Tair Smedlyaev was remanded in custody for two months at a closed court hearing.  The judge was reported to have based the detention order on the prosecution’s claim that 60 people had asserted that Smedlyaev was an ‘extremist’.  There was apparently also a statement from the Crimean ‘Centre for Countering Extremism’ which claimed that Smedlyaev is also a member of the Ukrainian nationalist organization ‘Right Sector’.

Smedlyaev, brother of the head of the Central Election Commission of the Qurultay, or Crimean Tatar National Congress, was arrested in Stary Krym on Oct 22.  His car was stopped on the road while he was driving with two sons, one only three and a half years old.

This followed the arrest of Musa Alkerimov on Oct 16 and Rustam Abdurakhmanov a day later.

The men are accused of inflicting serious injuries on law enforcement officers carrying out their duties during the meeting with Mustafa Dzhemiliev on May 3 in Armyansk.

The charges have thus emerged 6 months after the alleged ‘violence’.  There were no reports of such injuries at the time.

Mustafa Dzhemiliev and the Crimean Tatars who came to meet him were confronted by Russian OMON riot police and Crimean ‘police’.  It was decided that Dzhemiliev would return to Kyiv in order to avert bloodshed.  The only actual ‘offences’ reported at the time were that roads were blocked.

The following day the so-called prosecutor, Natalya Poklonskaya sent two reports to the Russian Investigative Committee and FSB “for the organization of criminal prosecution in connection with unlawful public protests” by Crimean Tatars in Armyansk.   She also issued Refat Chubarov, head of the Mejlis, or representative assembly of the Crimean Tatars with a warning that that the Mejlis could be dissolved, claiming that the protest was “action of an extremist nature”.

According to Alexandra Krylenkova from the Crimean Human Rights Field Mission around 200 people were fined between 10 and 40 thousand roubles on administrative charges over an ‘unauthorized rally’ and ‘not obeying the police’.

Like the Bolotnaya Square anti-Putin protests on May 6, 2012 in Moscow, the events in Armyansk on May 3, 2014, have been cited by the Crimean occupation regime as justification for numerous armed searches of Crimean Tatar homes and mosques, as well as repressive measures against members of the Mejlis.

The fact that Crimean Tatars are now being arrested and remanded in custody is therefore a matter of deep concern, as are the blurred charges, including of ‘extremism’ based on denunciations.