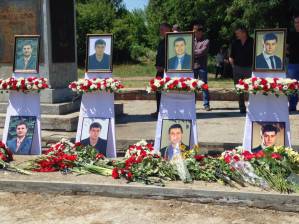 Adept at tit-for-tat diplomat expulsions, Moscow has tried the same strategy with allegations of religious persecution, and done a rotten job of it.

At a well-publicized press conference in Kyiv on Nov 25, representatives of most religious communities in the Crimea as well as members of the Crimean Field Mission on Human Rights reported major harassment and discrimination by the occupation regime of all faiths except the Ukrainian Orthodox Churches under the Moscow Patriarchate  (Please see:  All but one faith persecuted in occupied Crimea   ) .

A report appeared on Tuesday evening in Russia’s state-owned RIA Novosti about a press conference purportedly held in Moscow at the Russia Today press centre.  This, we are told, presented the results of a study “On mass violation of the rights of believers in the territory of modern Ukraine” carried out by the Russian Association of Religious Freedom.  The only account of this event or the report directly quote the RIA Novosti press agency.

The ‘religious figures taking part in the press conference’, assert that “it is the Ukrainian authorities who bear responsibility for the murders and discrimination of priests; numerous violations of believers’ rights and vandalism”.  It is claimed that the report describes such crimes in detail.

According to Father Andrei Novikov, head of the Holy Trinity Church on Vorobyovy Hills in Moscow, “the present Ukrainian government … is not only carrying out deliberate genocide of the Russian people, but also the deliberate destruction of any forces which in its view could ideologically counter fascism. Such a force is undoubtedly the Ukrainian Orthodox Church under the Moscow Patriarchate.”

He asserts that crimes against believers in Ukraine are committed “solely by one side of the conflict – the armed forces and National Guard of Ukraine”.  “We are not aware of any case of a church being seized, priest being killed, or church being destroyed by the armed forces of Novorossiya or any units opposing the Ukrainian government”.

Andrei Novikov left Odessa in May of this year and has since made numerous public statements about what he calls the ‘junta’ in Kyiv.  In June, he compared newly-elected Petro Poroshenko with Adolf Hitler.

There were three other participants, all from Moscow. Sergei Ryakhovsky, bishop of the Russian United Union of Evangelical [Pentecostal] Christians spoke of a ‘spiritual vacuum’ in Ukraine and of the West’s ‘hypocritical position regarding Russia’s responsibility for the situation in Ukraine.

The Mufti of Moscow and Moscow Region, Albir Krganov claimed that Muslims in Ukraine were threatened, their mosques coming under fire and religious figures intimidated.  This directly contradicted the account given by the Mufti of the Spiritual Directorate of Muslims of Ukraine at the press conference in Kyiv.

Rabbi Aaron Gurevich of the Federation of Jewish communities of Russia spoke of places of worship being destroyed.  The Rabbi had reason to confine himself to such a vague statement.  Ukraine’s Jewish community has consistently and publicly condemned attempts to use claims of ‘anti-Semitism’ against first EuroMaidan and then the new Ukrainian government.  A joint statement from Jewish organizations  called on the international community to consult them for information about the situation in Ukraine, not reports from ‘other countries’.

Not one specific fact of persecution, destruction, let alone of ‘genocide’ was revealed.  This is in marked contrast to all speakers at the press conference on the Crimea who had specific cases to recount, many of which had already been reported here from different sources.

Rights violations in the Crimea would not, of course, negate the need to condemn violations in mainland Ukraine.  Those supposedly committed by the Ukrainian government and military do, however, have to be demonstrated, especially given the  distrust aroused by Sergei Novikov’s provably false assertion.  Kremlin-backed militants from the self-proclaimed Donetsk and Luhansk ‘people’s republics’ have held a number of religious figures hostage, subjecting them to torture and humiliation.

Father Tikhon from the Ukrainian Greek Catholic Church was abducted in July, held hostage and tortured for two weeks by fighters from the so-called Russian Orthodox Army.

Father Viktor Wąsowicz, head of the Roman Catholic Church in Horlivka was also released in July after being held hostage by militants for two weeks.

One case has been reported of a Protestant Pastor being held prisoner for 2 weeks by members of a Ukrainian volunteer battalion, The same report mentions unacceptable treatment of another priest.  There may have been other such cases, but they are certainly not the norm.  There have been no recorded killings of religious figures by the Ukrainian military.

On Aug 30 a prominent member of the Donetsk Jewish community, Georgy (Eliayagu) Zylberbord was murdered by pro-Russian militants.

In July the bodies were found of four members of a Slovyansk Evangelical church.  The two sons of Pastor Oleksandr Pavenko – Ruvim and Albert, and two deacons of the church - Viktor Brodarsky, and Volodymyr Velychko were murdered after being seized by pro-Russian militants.  Faced with the cold-murder of four men, the Russian media tried unsuccessfully to claim that the men had been murdered by the Ukrainian army for helping ‘insurgents’.

Faced with the damning evidence of wide-scale religious persecution in Russian-occupied Crimea, Moscow, via Kremlin-loyal media, has attempted yet again to turn the truth upside down.  The weight of facts is against them and they really should not bother.